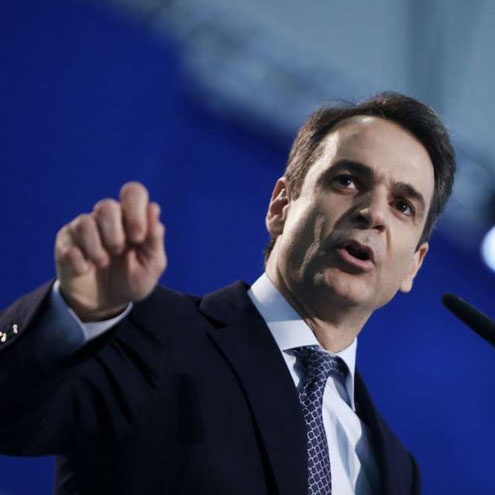 Greek opposition leader Kyriakos Mitsotakis, who is widely expected to win the elections this Sunday speculated that Prime Minister Alexis Tsipras accepted the Prespa treaty after he was conditioned by foreign countries with the continued financial assistance to avoid bankruptcy.

In an interview with the Alfa TV station, Mitsotakis said that “Tsipras exchanged Macedonia for other promises”. Mitsotakis cited eyewitness reports that in 2015 European Commission President Jean Claude Juncker conditioned the further financial aid to Greece with Tsipras agreeing to a deal on the Macedonian name issue.

This leaves basis to suspect that Mr. Tsipras gained something in exchange for the Prespa treaty, Mistotakis said.

The likely future Greek Prime Minister said that he will not have the authority to walk out of the Prespa treaty. In a bow to his nationalist base, Mitsotakis said that he will launch a widespread campaign to educate the world that “Macedonia is Greek”.

My estimate is that an international treaty ratified by the Greek Parliament can’t be canceled by one party. If you read the treaty, it doesn’t leave much room to nullify it. This is why I was sincere with the Greek people and with the members of Parliament that, once ratified, the treaty will be difficult to alter in the future. Unfortunately, they ratified it, Mistotakis said.

His promise regarding the treaty is to push hard to impose the exclusive right to commercially use the adjective “Macedonian” for Greek businesses alone, and to also promote the Greek region of Macedonia as the true Macedonia internationally.