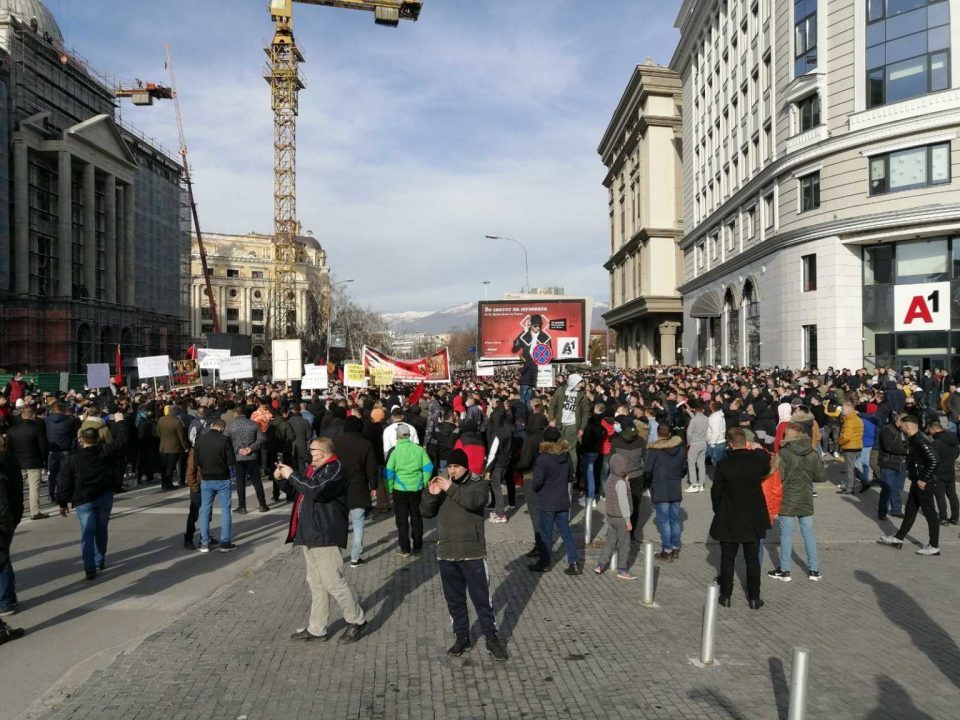 A large crowd of ethnic Albanians is marching on a protest through downtown Skopje today, chanting slogans in favor of the 2001 terrorist movement UCK/NLA, demanding the release of a group of Islamists suspected with the 2012 Good Friday massacre. Protesters also carried a map of Greater Albania and messages claiming that Albanians are original inhabitants of the Balkans, as opposed to Macedonians and others.

The protests began in Cair, a mainly Albanian neighborhood in the center of the city, after the Friday prayers, and the crowd continued to move toward the main courthouse and the office of state prosecutors. A retrial in Macedonia’s worst Islamist attack is nearing its end. The group of three killers and three suspected accomplices were all sentenced to life in prison, but the a retrial was ordered after now Prime Minister Zoran Zaev loudly insisted that he has wiretaps that will shed a new light on the case, and was accusing the then ruling VMRO-DPMNE party of staging the massacre. Zaev used these claims to increase his support among ethnic Albanian voters and parties, and it contributed to his power-grab in 2017. In 2020, after years of desperate please from the families of the killed boys to tell them what he knows, he admitted that he was bluffing all the time.

“Zaev needs to explain his comments about the Good Friday massacre”

Four boys and a man were killed on the eve of Good Friday while relaxing near a pond north of Skopje, by the group whose apparent goal was to spark a religious war. Even a Zaev aligned prosecutor who is an ethnic Albanian, Fatime Fetai, acknowledged that there is no new evidence that would move the case in a different direction and request a repeat of the life sentences for the defendants. Closing arguments are due next week and in response, Albanian organizations and parties are pushing to have the defendants released.

VMRO-DPMNE spokesman Naum Stoilkovski said that the coming rise in ethnic tensions, evident today, is the fault of Zaev and his reckless lying that was meant to advance his political ends.

Zaev, don’t hide behind Fetai and other prosecutors. Come out before the people you publicly lied to and tell them the truth, Stoilkovski said.