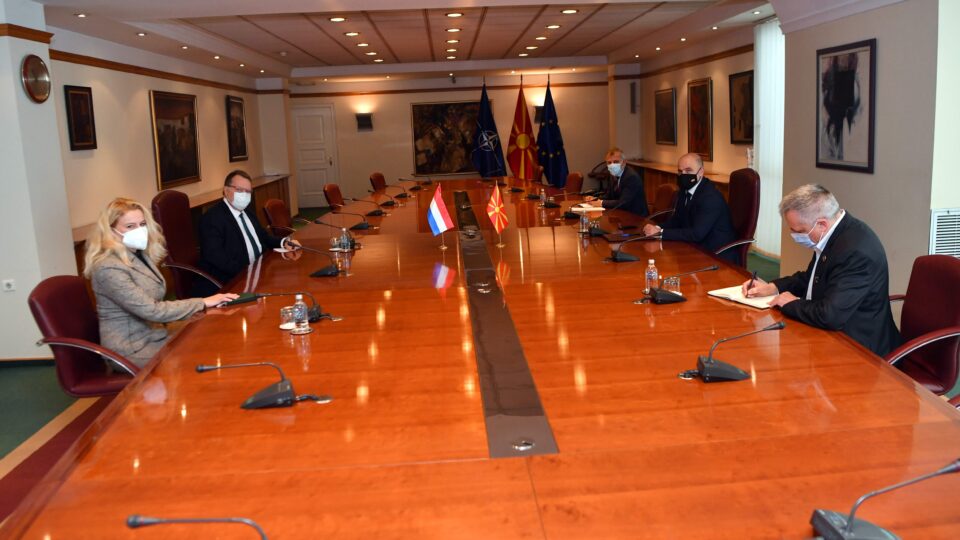 The Prime Minister of the Republic of Macedonia Dimitar Kovacevski met Friday with the Ambassador of the Netherlands to our country Jan Dirk Kop, who wished the Prime Minister and the new Government success in their upcoming term.

At the meeting, Prime Minister Kovacevski stressed the intensive cooperation between Macedonia and the Netherlands at the highest level in recent years, which strengthened the friendship between the two countries bilaterally, as well as in terms of supporting our country’s European integration process.

The mutual partnership, it was emphasized at the meeting, is being achieved at an extremely satisfactory level by both parties by constantly fulfilling the Declaration of Partnership and Cooperation that the two countries signed in 2017.

Ambassador Kop showed special interest in the meeting of Prime Minister Kovacevski with his counterpart Kiril Petkov from Bulgaria and expressed hope that the renewed communication between the two governments will encourage the expected progress in Macedonia’s EU membership process by holding the first Intergovernmental session to open the chapters.

Prime Minister Kovacevski stressed that as a country that has a strict approach to the objective evaluation of the accession criteria, the support of the Netherlands is a confirmation that with the commitment to the European reform agenda, Macedonia is fully prepared to open negotiations.