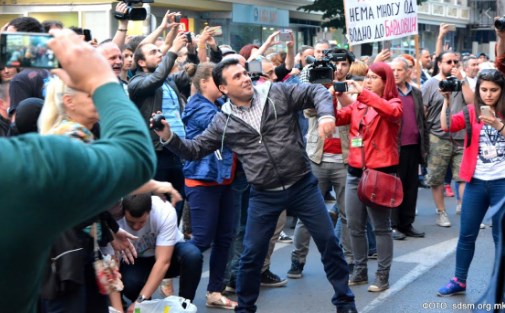 A new audio leak was shared anonymously today, showing SDSM party leader Zoran Zaev talk down about the activists of the “Colored Revolution”, the leftist movement that helped him grab power. It’s the second time a leak has shown Zaev in this light, after one leak previously showed him bragging how he “owns” the ostensibly independent NGO groups.

It’s unclear who recorded Zaev this time. In the previous leak, Zaev himself said that it came from Aleksandar Verusevski, the son of his powerful security chief Zoran Verusevski, who provided the wiretaps Zaev used to attack the VMRO-DPMNE party in his power-grab.

This time around, Zaev is heard talking to an unknown person about the popularity enjoyed by the Colored Revolution activists.

– The Colored Revolution is at 4,8 percent, Zaev says.

– What Colored Revolution? They’re not a party. If they register as a party.., his interlocutor begins to say.

– They can’t register as a party. I registered them, they can’t do it, Zaev replies.

He adds that he will pull everybody from the Colored Revolution into his political coalition, even those who are rejects – here Zaev is using a slur. The then uses an expletive involving the mothers of those who will join his coalition – the meaning being that those Colored Revolution activists who join him will be reined in.

Zaev’s SDSM party nominated several Colored Revolution activists as candidates for Parliament. One of them, Pavle Bogoevski, had to resign after cocaine charges and the others have largely lost their identity, independent from the SDSM party talking points.

Zaev is also heard discussing bishop Naum, who holds the see of Strumica and who is frequently alleged to have major business interests linked with Zaev. This reportedly extended all the way to marijuana growing – Zaev’s favorite business.

With the elections approaching, new leaks about Zaev appear daily, in which he is both disparaging the Colored Revolution and has his business deals exposed, including the most recent allegation of his links to a businessman accused of promoting Russian interests in Montenegro.

Meanwhile, a leak appeared that also shows opposition leader Hristijan Mickoski, who was likely recorded by suspected racketeer Zoran Mileski – Zoki Kiceec. In this recording, Mickoski also mentions Mijalkov and says that he donated several thousand euros so the party can rent buses for a rally. Kiceec was given a sweetheart deal in the Racket scandal, apparently in exchange for his recordings of Mickoski, which the SDSM party leaks to deflect from the corruption allegations surfacing about Zaev.