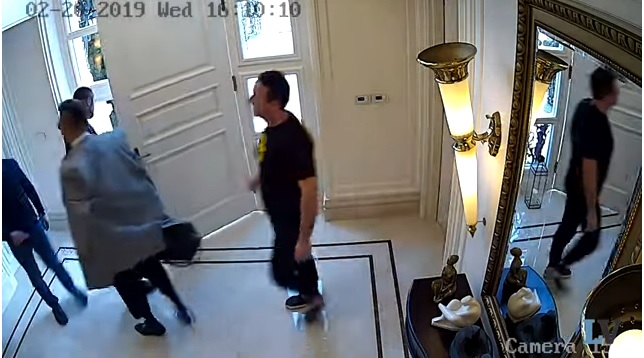 A second set of tapes that reveal the extortion of businessmen Jordan Orce Kamcev by people close to the Special Prosecutor’s Office was published this morning. This time the audio tapes feature the main Special Prosecutor Katica Janeva herself, and include allegations about prosecutor Lile Stefanova who was leading the case against Kamcev.

Just like in the first recording, published yesterday by the Italian newspaper La Verita, it contains conversations between Kamcev and showman Bojan Jovanovski – Boki 13, a close associate of Katica Janeva, who was likely the middleman in the extortion racket, taking 1.5 million EUR from Kamcev. In return for the money, Boki 13 is giving Kamcev assurances that Janeva will self-sabotage the money laundering case against him for which Kamcev was initially detained and then ordered into house arrest.

At one point in the news tapes, Boki 13 calls Kamcev on the phone, and then puts Janeva on the line.

– Thank you, send her my regards, Kamcev replies.

– I’m wrapping up and I can come over.

– In how long? Because I have something, in half an hour?, Kamcev begins to say, before being interrupted by Janeva’s easy to recognize voice on the line:

– Don’t worry about anything, everything will be well, Janeva tells Kamcev, prompting him to respond “ok, ok, no problem, no problem”.

Kamcev and Boki 13 continue to plan a meeting later that day.

If confirmed, this audio would be the key piece of evidence that Janeva was personally involved in the extortion of 1.5 million EUR from Kamcev. She charged Kamcev and several other businessmen, as well as former state security chief Saso Mijalkov for money laundering worth 11 million EUR in November 2018, well after she was legally banned from starting new cases. Kamcev and Mijalkov were detained shortly after, and before New Year the court allowed Kamcev into house arrest in his luxury villa north of Skopje.

According to the charges against Boki 13, it was then that he started visiting Kamcev and demanding money from him, initially eight million, later negotiated down to six, in exchange for getting Janeva to drop the case against him. In the first tape, published yesterday, a well prepared Boki 13 explains the steps needed to get Kamcev out of his house arrest, and says that Janeva will not take the legal steps she has available that would block Kamcev’s request to end his house arrest order. Shortly after paying the money, Kamcev was released from his house arrest owing to an appeal before the Supreme Court. The SPO contested his request but the tapes published by La Verita make it very likely that the prosecutors they didn’t use all options available to them to keep Kamcev detained, and cashed in handsomely for that.

The new tape also contains damning information about Lile Stefanova, the experienced prosecutor who Janeva ordered to lead the case against Kamcev. In one of the several audio tapes that La Verita published today, Kamcev tells Boki 13 that Stefanova was also extorting money from him, using as an intermediary a major real-estate developer and mining executive Vanco Cifliganec, who’s personally linked with the Zaev family through his son who is dating Zaev’s niece. An annoyed Kamcev is heard asking Boki 13 to explain if what he is asking is the final price for his release, given that he is facing additional attempts to have money extorted from him by prosecutor Stefanova.

But what am I getting for this? I accept everything, I don’t care, but I need to know, you tell me, chief, this costs that much, that costs that much and you and me, we can agree on everything. But you need to tell me, Orce, I want this, this and this. Or tell me, chief, I’m not the one who can make the complete deal. What I promise on my part, it will be done, but I want to know what am I getting, when and how? You lead the game, tell me you get this and that, and I will accept it. You have the team. But I don’t know, is this woman part of our team? This Lile? Is she in? She is pushing her own story. And you know, when Cifliganec called me once, he asked me to give her an office, something suitable for a dentist’s office or some stupid thing like that. I told them to f*** off, I was not interested, it was before I got into this…, Kamcev tells Boki 13.

Boki 13 asks when did this happen, and continues to say he knew nothing about this side-attempt at extortion. Stefanova was reportedly questioned by the police shortly after Boki 13’s arrest three weeks ago, and since then she gave a number of statements insisting that the SPO did all it had to do to prosecuted Kamcev. Stefanova notably qualified her comments saying that, in the end, it was Katica Janeva who made all the final orders and signed all the documents and initiatives.
The new tape also captures the hand-over of the money, which are likely one installment of the 1.5 million EUR payment. Boki 13 is heard asking if that is all that was agreed, to what Kamcev laughingly replies that he counted all the money himself and even wrote up a “specification for you, like for a first grader”. “I tied them up with rubber bands, haha”, Kamcev tells Boki 13, who is annoyed that half of the money is in notes of 50 EUR.

That’s what the bank had bro, what can I say?, Kamcev tells Boki 13, before joking about the fancy Louis Vuitton bag he put the money into (and, reportedly, a GPS tracking device). “This suits your style, no, hahaha?”, Kamcev tells the famously flamboyant and cross-dressing Boki 13. “I can’t give them in an Adidas bag. Zoki (Zoran Mileski, the co-defendant) brought me this Uniqa bag, you can see it was all criminally packed, hahaha, I tell him, Zoki, go quickly, the man comes at 3 oclock”, Kamcev adds.

Milevski is also heard in the recording, explaining to Kamcev that paying the bribe is the quickest way, and beats having the trial drag on and paying lawyers.

Lawyers, judges, they will racketeer you. Boki knows the whole thing, Milevski is heard telling Kamcev, pushing him to accept the offer.