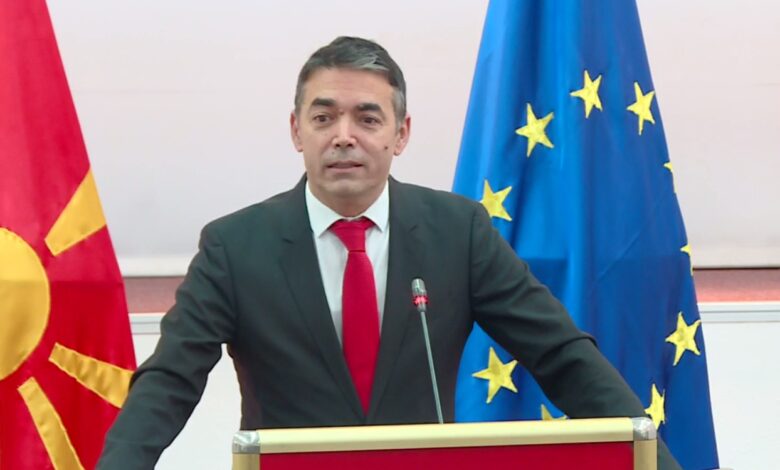 Zaev’s former Foreign Minister and Deputy Prime Minister for EU integration Nikola Dimitrov came out with a hard hitting press conference today, accusing the Government of being ready to accept the most hardline Bulgarian demands. Dimitrov, who signed the 2018 Prespa Treaty which gave away Macedonia’s name and much of its history to Greece, accused current Foreign Minister Bujar Osmani of being willing to accept Bulgarian demands that would reduce the Macedonian language to a dialect of the Bulgarian.

I do not have full trust in the Foreign Minister on the issue of Bulgaria. That comes from my experience with our internal coordination meetings and the meetings in Brussels. I have a sense that he is driven by the need to achieve success at any cost, which is dangerous and not productive. I may be wrong and I hope I am wrong, Dimitrov said.

He added that he was being offered to go to D.C. as Ambassador or to choose a post to his liking, but that this would “silence him” and remove him as a source of resistance to Bulgarian demands within the Government. Dimitrov also claimed that “many international friends” wanted to see him named as Prime Minister after Zaev resigned. “That is no secret, many international friends called me to support me in taking over the Government”, he said.

Dimitrov was an enthusiastic supporter of the idea that Macedonia should give away chunks of its history and identity to Greece to secure its approval for EU and NATO membership. But once Bulgaria raised similar demands against Macedonia, he largely disappeared from public eye, and after several trips to Sofia, stopped engaging with Bulgaria. Bulgarian officials publicly accused him of being a “virus worse than Covid” because they saw him as trying to get EU and US officials to put pressure on Bulgaria. The Foreign Ministry is now led by an ethnic Albanian, a first for Macedonia, and it is widely seen that Osmani will be far more open to accepting Bulgarian demands aimed against the Macedonian national identity. In his press conference, Dimitrov advised that Macedonia should “freeze” the dispute with Bulgaria – a complete policy reversal from his previous calls that Greek demands are accommodated as soon as possible.

It would be wise that we remain open to dialogue, but not pre-occupy ourselves with the dates, whether we reach a deal in January or July. Let’s invest our energy at home. The issue is that we must be prepared for a dignified dialogue and base our positions on European principles and international law. We want to be friends with Bulgaria, but they have to respect us, Dimitrov said.

Dimitrov is the son of Dimitar Dimitrov, a former high VMRO-DPMNE official who was, in his day, accused by SDSM of being far too pro-Bulgarian. In the 1990-ies, the elder Dimitrov also famously cursed whoever in the future signs off Macedonia’s name, that his right hand may whither. After being appointed to top ambassadorships by VMRO-DPMNE, Nikola Dimitrov switched sides and endorsed SDSM and Zoran Zaev during the 2015-2016 Colored Revolution, for which he was given the post of Foreign Minister, and later Deputy Prime Minister. He was even named to the top of the SDSM list of candidates for the 1st district in the 2020 elections.

Today, he declared that he had two major clashes with the Zaev Government, once in Skopje and once in Brussels, when he refused to accept the Bulgarian demands. Zaev was very open to accepting all key Bulgarian positions in late 2020, a move which caused divisions in his party and greatly contributed to his defeat in the 2021 local elections. Dimitrov indicated that he will remain influential on the political and diplomatic scene despite the fact that he will not be in the next SDSM – DUI led Government.

The office of outgoing Prime Minister Zoran Zaev responded to Dimitrov’s comments with a press release, in which Zaev insists that the Macedonian national identity and language are not a matter of discussion with Bulgaria – which is at the core of Dimitrov’s stated reasons for his distancing from the SDSM policies.

Nikola Dimitrov agreed to the Macedonian positions and had a serious role in determining these positions, in a process led by Foreign Minister Bujar Osmani. If Dimitrov was opposed to anything in the positions that were jointly determined, it would be honest that he explains to the people what he is opposed to. Otherwise, he will leave an impression that he is engaging in untruths and speculative public manifestations after he was left out from the future Government, Zaev’s office stated.