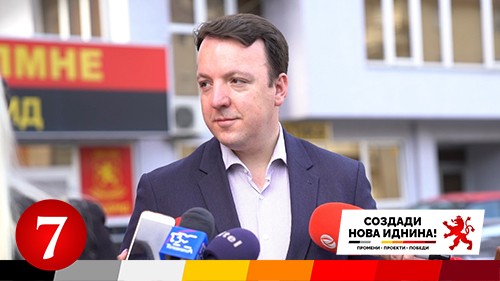 VMRO-DPMNE Vice President Aleksandar Nikoloski called on the voters to unite behind the opposition in the second round of the local elections, to finalize the work started in the first round, when VMRO candidates won a string of convincing victories against SDSM. Nikoloski spoke after the meeting of the VMRO-DPMNE Executive Council, held on the day when the historic VMRO organization was founded in 1893. Nikoloski said that the members of the Committee decided to extend their support to the candidates of the Alliance of Albanians and Alternative parties in the second round, for a unified opposition win against SDSM and DUI.

We call for unification and mobilization of all citizens who want to have a better future, more success, who want to get to work. We intend to build up Macedonia and to tear down the walls of division and hatred imposed by the Government. We will not say that we have the votes given for granted, like SDSM does. We call on all citizens to vote on their own free will, and to support the candidates who are genuine in their opposition to the Government, Nikoloski said.