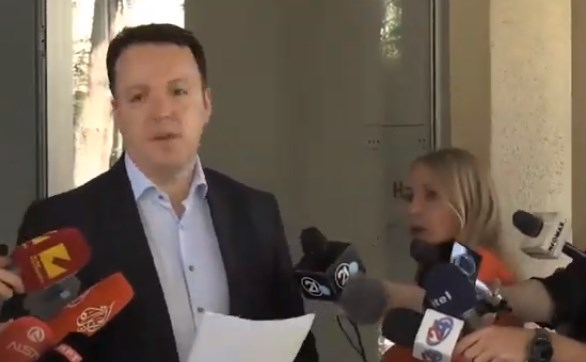 VMRO-DPMNE Vice President Aleksandar Nikoloski after Wednesday’s meeting of the party working groups in Skopje unveiled the opposition party’s remarks to the EU’s draft general position on the negotiating framework and the EU’s common position on the accession negotiations.

It is about three documents, two of which are essential because only for Macedonia a precedent is set in which the first intergovernmental is postponed and conditioned by the adoption of constitutional amendments. Our positions are very clear, very precise, we presented them in a document that will be distributed to you after the statement, in which we intervene exactly within the framework of these two documents, in correct articles and with correct names.

Secondly, in point five of the negotiating framework, the last paragraph is deleted, which includes the agreement on good neighborly relations with Bulgaria from 2017, as well as the annual reviews and measures for its effective implementation according to article 12. In point five, the criteria according to which Macedonia will progress for all countries, that is the Copenhagen criteria and the Stabilization and Association Agreements, only for Macedonia bilateral agreements are added and especially Article 12 in which it is foreseen that Bulgaria will have control over our history, our textbooks, our education and our self-identification, we cannot accept that and therefore request that it be deleted.

Furthermore, in the negotiating framework, we request that the words “the first phase of” be deleted in point 1, that is, in simpler terms, that there be no division of the first intergovernmental conference and that it is not conditioned by a change to the Constitution, but that the negotiations begin immediately.

Then, we request the deletion of point 11 which reads “we will present this negotiating framework to you on the basis of the general position of the EU during the next meeting of the intergovernmental conference which we are ready to hold without further delays or additional political decision, as soon as Macedonia will implement its commitment to complete the constitutional amendments”. We believe that constitutional amendments are not necessary for Macedonia to start negotiations with the EU.

The next thing we ask to be deleted is point 13 of the negotiating framework which also divides the negotiation process. And finally, point 14 of the negotiating framework, in which it is written that “in this regard, we welcome the agreement on the protocol of the second meeting of the joint intergovernmental commission established in accordance with article 12 of the good-neighborly agreement with Bulgaria, this important step will contribute to good-neighborly relations and regional cooperation which remain essential elements of the enlargement process as well as of the stabilization and association process”, we propose to delete the conditionality with the adoption of the protocol and subsequent protocols that Macedonia would have with Bulgaria, because those protocols are blackmailing for Macedonia and they require revision of Macedonian history, Macedonian culture and identity.

These are our views, these are our positions and we have presented them clearly, said Nikoloski.