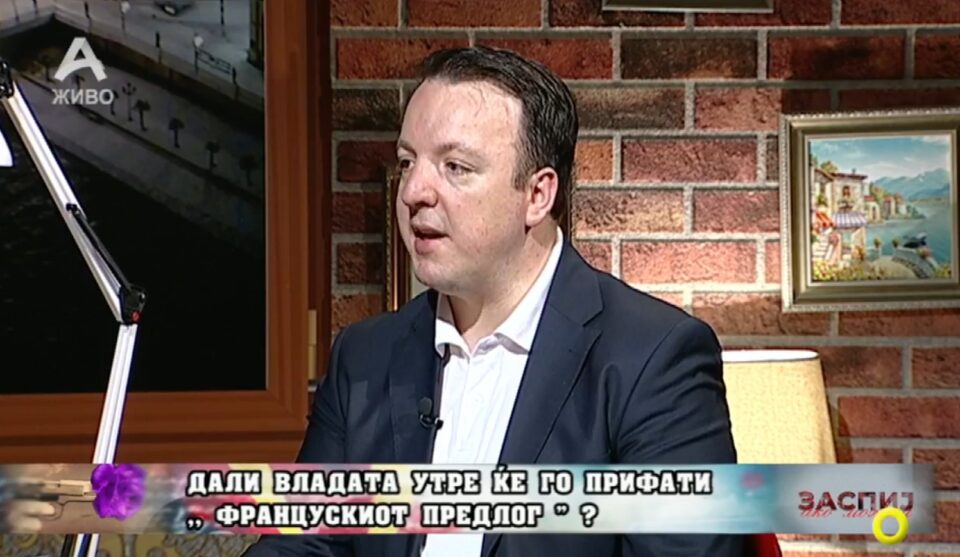 In Monday’s interview with TV Alfa, VMRO-DPMNE Vice-President, Aleksandar Nikoloski, commented on the protests held against the acceptance of the French proposal for the Bulgarianization of Macedonia and said that he was very happy that tens of thousands of citizens support those same protests and that he was convinced that if the economic conditions in Macedonia, if people could afford to put gas in their cars, there would be hundreds of thousands.

These protests became a beautiful movement of Macedonians, I am very happy that Macedonians showed their patriotism because many thought that Macedonians lost their patriotism and buried it deep inside themselves, but at these protests we see that this is not the case and that patriotism is here and it just needs to be woken up, I am happy that our friends from other parts and people who live in Macedonia are joining us, I see many Serbs, Roma, Vlachs who are coming, I see Turks who are coming and that is very important because this is a common battle and I know that there are also numerous Albanians who support this, some of them come to the protests, some intimately. What happened tonight was a spontaneous expression of the people’s dissatisfaction, in conditions where the government continuously ignores the people’s revolt, in conditions when the people come out for three days in a row, almost never in the history of the country, spontaneously and self-organized for three days in a row to appear before the government, a normal government would either resign, or withdraw from the solution, in this case this proposal which means erasing the Macedonians, the Macedonian language, Macedonian history and Macedonian culture. Instead, they are going towards arrogantly passing it, there are some announcements that this document will be adopted by the Government tomorrow and at the end of the day it means nothing because the basis of this document is the change of the Constitution, and for the change of the Constitution a two-thirds majority is needed. We made it clear and tonight I want to repeat that VMRO-DPMNE and the parliamentary group will not vote to change the Constitution of Macedonia! This means that the Constitution will not be changed, by not changing, the agreement falls. Because the basis of the agreement made by Kovacevski and Petkov is the change of the Constitution and we will not allow it, that is, we will not support it in the Parliament and without us, they do not have a two-thirds majority, said Nikoloski.