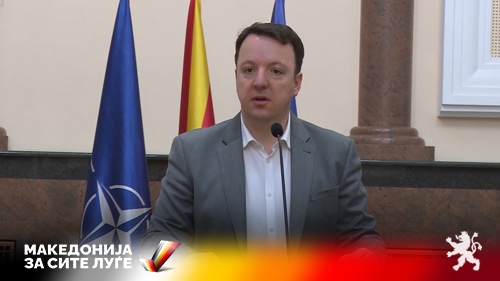 Today we have a meeting with representatives of the so-called Young European ambassadors, it is an extremely talented group of young people from Macedonia, a total of 120 were selected in Europe, of which 10 are Macedonia, which given the size of the country is an extremely large number. And we will talk about the situation in the country and European integration, the MP of VMRO-DPMNE, Aleksandar Nikoloski said at a press conference on Tuesday.

It is a special honor for me that yesterday, during the session of the Parliamentary Assembly of the Council of Europe, I was elected Vice-President of the European People’s Party within the Council of Europe. This means that within the largest political party in Europe I will have the opportunity to coordinate activities together with the president of the group in the Council of Europe. These are primarily activities related to the protection of minority human rights, language, fair and democratic elections, election monitoring, fight against organized crime and corruption, and economic equality, said Nikoloski.