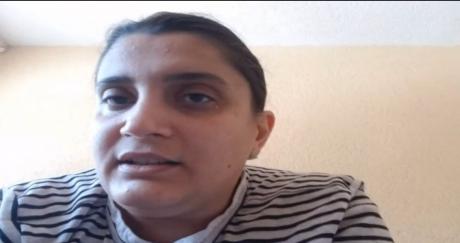 A nurse from Debar suffered from horrific medical malpractice after, as she claims, a doctor allowed his son to operate on her. Four months ago Jildiz Veaposka (28), who is an ER nurse, went to the Struga hospital to give birth through C -section.

She was treated by doctor Muhamed Hasani, director of the Struga hospital, in his private office. Several days after the operation she continued to have pain and serious health problems, but was assured that all is well, and was discharged by doctor Asani. She had to return after the pain became unbearable, and passed out. The woman was eventually rushed to the Emergency Clinic in Skopje, where she was urgently operated and told that she is missing a kidney, her uterus and an ovary.

I woke in Skopje, up hooked on all these machines, she told Sitel TV.

Jildiz claims that she is now facing a wall of silence, after she began to raise doubts that Hasani allowed his inexperienced son to operate on her, and that he botched the surgery. The nurse is pressing charges against the hospital director and demands answers. The opposition AA party announced they will support her in the demand, and claim that public institutions in Struga remain badly mismanaged by the ruling DUI party.

VMRO-DPMNE spokesman Naum Stoilkovski also called on the Healthcare Minister Venko Filipce to investigate the horrific incident. “We can’t accept a woman to have to go through courts seeking justice after being left without her organs. The healthcare system is collapsing, the epidemic is rampaging through the country, we have no vaccines, and Minister Filipce is riding motorcycles across mountains and is building villas in Skopje”, Stoilkovski said.

In a likely tax evasion scheme, Minister Filipce’s family paid almost 10 times below market value for the land they acquired on Mt. Vodno

Nurse at a frontline coronavirus hospital dies of Covid-19