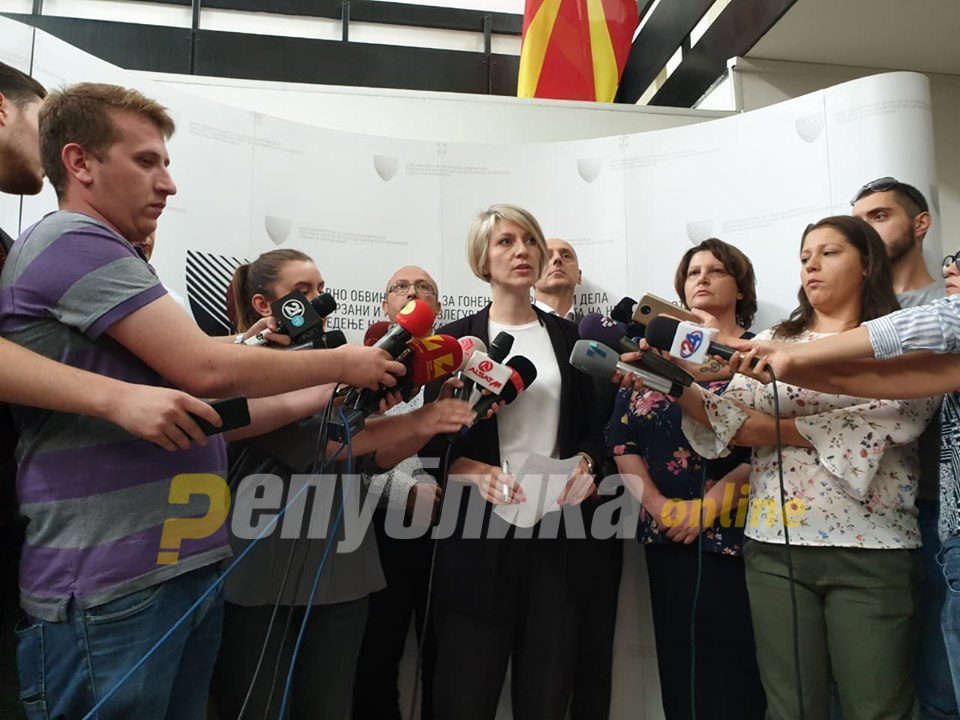 The most shocking event of the day (so far) was the press conference held in the Special Prosecutor’s Office by Lence Ristoska who, in front of much of the assembled SPO staff, denounced her boss Katica Janeva. Ristoska, Fatime Fetai and Janeva were the public faces of the SPO, to the point that supporters of the SDSM party and the Colored revolution wore shirts emblazoned with the three prosecutors on top of the letters S P O.

The three were portrayed as “Charlie’s Angels” and “Beyonce like super-stars” by the fawning international press during the campaign to bring down the VMRO-DPMNE led Government.
And yet today Ristoska alluded that she was sidelined in the SPO operations and insisted that the institution should be allowed to carry on, without its disgraced front lady.

We still do not have any information that the head of the Special Public Prosecutor’s Office Katica Janeva is involved in the investigation of the Public Prosecutor’s Office into the “Racket” case and that all cases should be cleared, which is in our interest, said Ristoska said at the press conference, where she was joined by most of the SPO staff, including Lile Stefanova, who was reportedly questioned during the investigation into the alleged extortion of money from businessman Jordan Orce Kamcev.

Fatime Fetai, the third face on the SPO t-shirt, was absent from the press conference, but Ristoska said that she has the support of the colleagues absent due to vacation. As the public was wondering whether she will join Ristoska in the defenstration of Janeva, a video began making rounds on the social meda from a recent appearance by Fetai at 1TV, the TV station owned by Bojan Jovanovski – Boki 13, who is in the center of the allegations. Fetai is asked by anchor Saso Ordanoski, who is a strong supporter of Janeva and the SPO, about the possibility that Janeva is removed from her office. 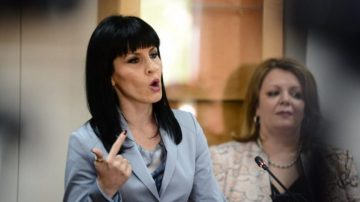 What do you mean, removing Katica Janeva? This woman was the first who made positive changes in the rule of law in Macedonia, does she deserve to be removed from the helm? I may not be so important, but Katica Janeva is important, she bore the burden of threats and intimidation, cared for us as if we were her family, Fetai told Ordanoski. The outspoken nature of her defense makes it more difficult for Fetai to join in the rejection of Janeva, even as very few people seemed willing to continue sticking their necks out for Katica Janeva. Fetai now faces the choice – whether she will try to publicly defend Janeva, of will she join with the rest of the team and the rival state prosecutors who brought the case against Boki 13.

To be fair, Ristoska did insist that Katica Janeva should have her right of presumption of innocence respected, even as the police seized her phone and her son’s computer to determine whether they took part in the blackmail of Orce Kamcev and if they had wiretaps removed from the SPO vaults and used in the extortion. It was a strange request coming from Ristoska, given how strongly the SPO insisted on public show trials of their defendants, who they were prosecuting using illegally recorded wiretaps which are widely seen as inadmissible in court. Part of the case against Boki 13 is allegedly based on recordings done at Kamcev’s house – and many are expecting to see if they were done with a warrant from rival state prosecutors and judges, and if Janeva will be officially charged and put in a ironic position to claim that the evidence against her is unlawfully recorded. SPO prosecutors giddily discussed private details about the cases they investigated, and about the lives of the politicians they went after, which only threw Ristoska’s request into even starker contrast.

The press conference, with hastily assembled journalists and cameramen, was seemingly a desperate attempt by the prosecutors to protect their jobs and salareis. It’s incomprehensible how quickly and easily they sold their boss Katica Janeva down the river. How come they won’t reveal details about the case they brought against Kamcev all of the sudden? This was not the case when they briefed the press in the past? They held press conferences during which they all but sentenced their suspects. Suddenly, after being suspects themselves, they have strange new found respect for the principle of presumption of innocence?, wrote journalist Igor Mickovski about today’s curious SPO press conference.