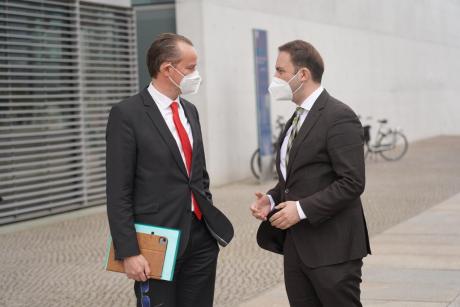 What is encouraging is the fact that within the presidency trio, Germany retains its proactive role in supporting the Portuguese Presidency, rounding off the process of EU unification as a common EU interest. Macedonia, and in general the Western Balkan region is not located on the periphery of Europe, but in the heart of Europe, surrounded only by EU member states. Such a step would send much-needed encouragement to the entire region and strengthen European credibility as a whole, Osmani said.

At the meeting with Uwe Corsepius, adviser to the German Chancellor Merkel, the focus was again on reaffirming German support for our European perspectives, but questions were also raised about other forms of co-operation aimed at developing overall relations between the two countries, he added.

Osmani’s agenda in Berlin included meetings with several important interlocutors, and in that regard, the Minister met with Sabine Stöhr, Head of the Western Balkan Division in the Federal Foreign Office, and Susanne Schütz, Director for South-East Europe, Turkey and EFTA States in the German Federal Foreign Office.

His visit to Germany was also used for meetings  with Bundestag officials, which focused on bilateral cooperation between the two countries, the implementation of reforms in Macedonia and the transformation of the country into a credible European democracy. It was jointly confirmed that Macedonia has delivered and that our country deserves to start the process of negotiations and transformation in order to join the EU.

Osmani to attend meeting of NATO foreign ministers in Brussels