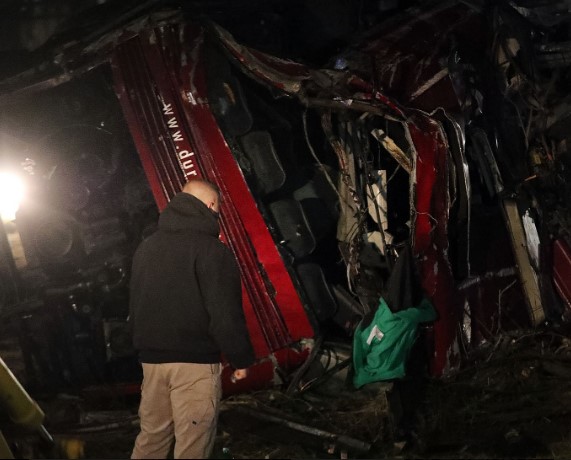 Six people were detained in relation to the bus accident near the village of Laskarci, which happened a month ago, on February 13, on the Skopje-Tetovo highway. Among them are the bus driver and the owner of the bus company “Durmo Tours”.

The Basic Public Prosecutor’s Office is expected to present the details of the investigation into the bus accident in which15 people were killed and 30 were injured.

The bus was taken to the Faculty of Mechanical Engineering, to investigate whether it was technically functional, and the Forensic Expertise Department investigated the cause of the accident. Witnessed were questioned, including the bus driver who received threats on social media, and police took care of his safety.

The bus of the company “Durmo Tours” carrying 51 passengers from Skopje to Gostivar, drove off the Tetovo-Skopje highway embankment and plunged into a small ravine, landing upside down.

Taravari on Laskarci bus crash: In hybrid regimes like Macedonia such cases are never resolved

Two years since the Laskarci bus crash: 16 victims, none convicted