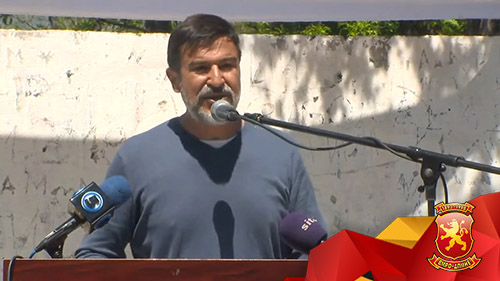 Unfortunately, Macedonia has been enslaved many times in its centuries-old history, but fortunately, mother Macedonia gave birth to sons who always liberated her, said Aleksandar Pandov, president of the Patriot Institute of VMRO-DPMNE at an event in Prilep on Victory Day who with a minute of silence paid tribute to all those who gave their lives for a free Macedonia.

According to Pandov, it is unfortunate that 76 years after the victory over fascism on May 9, 1945, Macedonia is again a captured state, whose prime minister signed harmful, treacherous and humiliating agreements with neighbors, including Bulgaria.

Due to the agreement with Bulgaria, now Macedonia has a blocked EU path and is conditioned by writing a “common history” which in translation, I will allow myself as a historian to say, would mean: eradication of us Macedonians! It is also unfortunate that in the 21st century, in 2021 in Macedonia we have political prisoners in Macedonian prisons, such as the defenders of the Constitution!, said Pandov.

Zaev is selling out Macedonian history

While in Serbia 30,000 people get vaccinated daily, here people who want to get the vaccine are counted

Deceased patients lie for hours next alive patients, Zaev and Filipce must be held criminally accountable