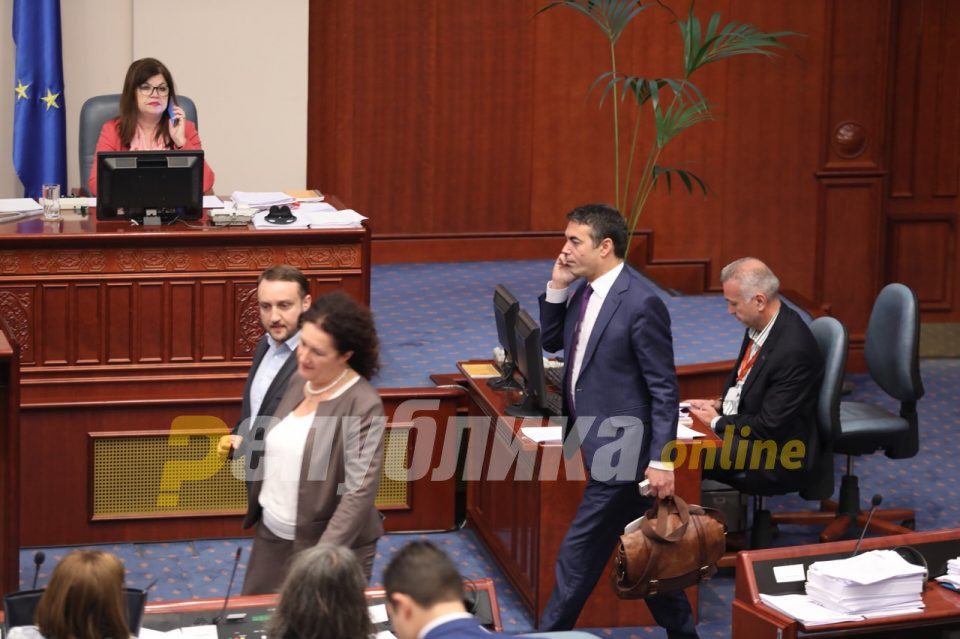 With 59 votes opposed and 20 in favor, the Macedonian Parliament refused the proposal of no confidence in Foreign Affairs Minister Nikola Dimitrov. The proposal to dismiss Dimitrov came after the complete acceptance of Greek demands in the Prespa Agreement, as well as his dismissive comments against citizens opposed to renaming the country who, Dimitrov said, “have issues”.

In his closing remarks, Dimitrov said that the country is getting to its feet as result of his actions. He also said that he will “seek forgiveness” from his parents for his role in renaming the country. His father Dimitar Dimitrov, a writer and former Minister and diplomat, in the 1990-ies famously cursed “whoever changes the name of Macedonia”, not knowing that one day it will be his son who will sign the treaty to give up the name.

With more togetherness, lightness will defeat darkness and we can focus on issues worthy of debate such as the tax policy, the economy, Dimitrov said.

He attacked the previous, VMRO-DPMNE Government, where he served as ambassador and lead person in charge of suing Greece in front of the International Court of Justice, for not accepting Greece’s demands sooner. In response, former Foreign Minister Antonio Milososki described how Dimitrov begged to be part of Gruevski’s team, which he now loudly criticizes.

In 2008 the President decided to dismiss his special envoy for the name issue. The President was Branko Crvenkovski and the envoy was Nikola Dimitrov. The first port of call for Dimitrov after this happened was Prime Minister Nikola Gruevski, and Dimitrov asked Gruevski to be appointed his special advisor for foreign affairs. He did his job well and was further rewarded with the diplomatic post in the Hague. So please don’t try to obscure the truth about your work with Gruevski, because it is well known. If you disagreed with him so much, why did you let him appoint you as an Ambassador to the Hague? Why did you choose to serve a man you now criticize so much and whom you apparently did not respect? Seems your career came first for you, Milososki said.