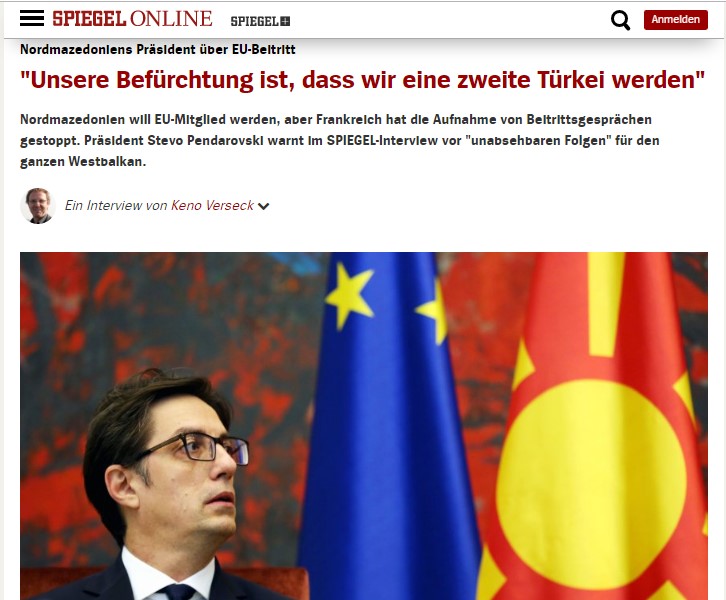 Possible spring postponement of the decision to start Macedonia and Albania membership talks with the EU would be a very serious blow. Repeating a strategic mistake from October could have very deep, unpredictable, and possibly irreparable consequences, President Stevo Pendarovski said in an interview with Spiegel.

Pendarovski reminds that delaying the decision to start negotiations in October was a great shock for Macedonia and many others.

Although French President Emmanuel Macron said reforms to the EU enlargement process were needed, everyone hoped that the start of negotiations with Macedonia and Albania would not be blocked. It was a great disappointment for our citizens, for our Government and for me personally. After all, we have made all the necessary reforms and agreements, and most of all we have done something unique in modern world history – to solve the problem with Greece that was blocking us, we have changed the name of the country from Macedonia to North Macedonia, Pendarovski said.

He points out that many leading EU politicians have acknowledged that a strategic mistake has been made and that the Union cannot be a relevant geopolitical player unless it integrates the Western Balkans.

Pendarovski says he has received assurances from Macron that the problem is not in Macedonia, but in the EU that needs reforms in the negotiation process, but he says we fear we can become the second Turkey that has been stuck as a permanent candidate for membership for years.

The head of state says that Skopje has nothing against reforms in the negotiation process and is ready to implement the necessary reforms, while accepting the proposed model of reversibility, but expects eventual reforms of the accession process to be made quickly and without further delays.

Any alternative to full-fledged EU membership is unacceptable for Macedonia, Pendarovski said.

He warns that distancing the EU from the Western Balkans could open up space for other players and negatively affect reforms in the countries of the region.

They can say that the Macedonians fulfilled all the conditions, changed their name, and got nothing. Then why should we make serious efforts and reforms? This especially refers to the issue between Serbia and Kosovo, Pendarovski said.

Asked if the vacuum could be used by Russia, Turkey and China, he said he did not want to name any state but that there were centers of power that were not happy with NATO and EU enlargement.

In this context, countries in the region are often the target of fake news, misinformation or campaigns to destabilize them, President Stevo Pendarovski said in an interview with Spiegel.