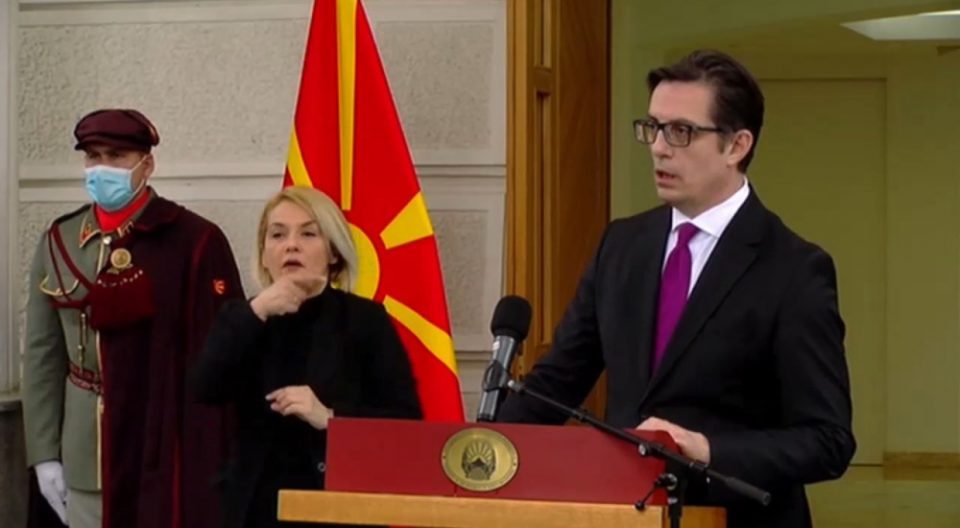 Following Friday’s meeting with VMRO-DPMNE leader Hristijan Mickoski, President Stevo Pendarovski said that the meeting was aimed at re-establishing political dialogue and for a democracy it is not typical to have interruption of communications between institutions.

He said they discussed the problems and challenges the country is facing in the past year.

I informed him about what is happening in terms of the blocked European integration and told him that no news is coming from Sofia due to their situation with the scheduling of new elections and I told him what our European friends in Brussels think about the whole situation, said Pendarovski.

Pendarovski emphasized that regarding the events of April 27, he reiterated his position that amnesty for persons who committed an unprecedented crime in modern Europe is out of the question, because their guilt in that process was indisputably established in the trial.

Regarding the legal qualification of the crime, it is a fact that those persons were not convicted for the crime of terrorism, but for terrorist threat to the constitutional order. The actions by which that crime can be committed are similar, the  sentence of 10 years is identical. On April 27, there is a verdict for people who were part of the same mob that beat Zijadin Sela. If the legal qualification of that verdict is followed, those people were convicted, but they were not tried for the crime of terrorism, but for attempted murder, said Pendarovski.

He says that his position is that if there is new evidence that was previously unknown and that could change the process, the case should be re-opened, and that decision should be made by the court, and not by a political factor.

In my opinion, if there is new evidence that has not been known so far, it should be presented and the court should assess its weight and whether there is a basis for a new trial. It does not mean that I advocate reopening the case. I am only quoting the provision of the Law and the legal possibility, according to which these people, through their lawyers, after an extraordinary legal remedy, can ask the Supreme Court to evaluate any new evidence, Pendarovski said.