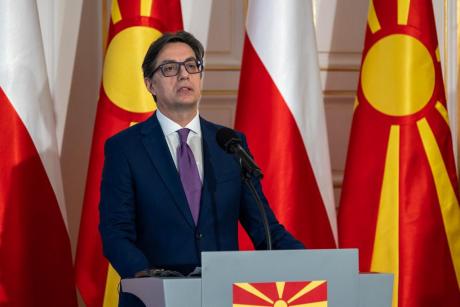 President Stevo Pendarovski said last night that changing the Constitution in order to include Bulgarians in it is not terrible and will not destabilize the country, but as he said, according to his information, the government does not have the necessary majority in the Parliament for those changes to be made.

I am in favor of changing the Constitution for Bulgarians to be included in the Constitution because I do not think that it is terrible and that it will destabilize Macedonia. Apart from the Macedonians, we also have other parts of nations. However, if we do not have the necessary 80 MPs, how will we make the changes, said Pendarovski in an interview with the “24 Analysis” show on TV24.

According to Pendarovski, from the information available to the public, as he says, at this moment a maximum of 74 MPs in all combinations would vote for including Bulgarians in the Constitution, whether they are in the ruling majority or in opposition.

Six MPs are missing. From what is the rest of these 74 to 120, I don’t know a single one who says – “I am still thinking, I might vote”. I haven’t heard. So the actual situation is that. Is it discussed, yes. Does the Government need to talk to all MPs, the answer is yes, says Pendarovski.

He mentioned a series of visits by international representatives, including, as he announced, the visit of German President Frank Walter Steinmeier to the country on November 29, during which he will address the Parliament.

Pendarovski: Let the symbolism of purified waters be a motive for spiritual purification and inspiration for good deeds