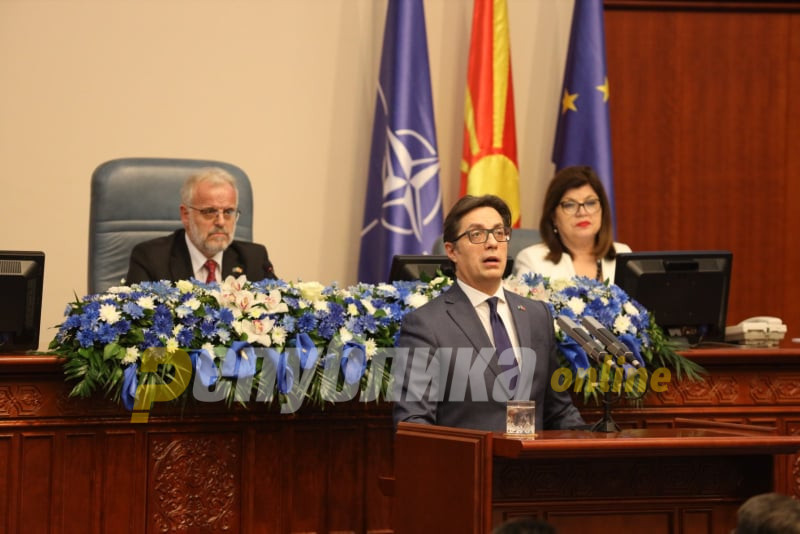 President Stevo Pendarovski condemned the actions of organized crime prosecutor Vilma Ruskoska and the way she presented the surveillance materials in the Racket trial. Ruskoska tried to sneak through a recording that shows one of the defendants Zoran Mileski – Zoki Kiceec in the company of Zoran Zaev’s brother Vice Zaev. What is worse for Pendarovski, she presented a tape of disgraced former Special Prosecutor Katica Janeva being driven to the quarter of government villas on Vodno by saying that she took off in the direction of Pendarovski’s villa, without mentioning that Zaev also has a villa near-by.

That was in mid August. I didn’t yet live there. That is not a proper thing to say, that is sensitive information and you can’t just speculate like that. She may have been climbing to see the Vodno cross, Pendarovski said. Pendarovski does have a working residence he was using at the time in the same area. Pendarovski denied meeting Janeva, and said that he met with her co-defendant Bojan Jovanovski – Boki 13 during the SDSM led Colored Revolution and took pictures together.

Opposition leader Hristijan Mickoski also mocked how the surveillance team stopped filming Janeva as they realized she may be going to Zaev’s or Pendarovski’s villa at the height of the Racket scandal.

During an interview today, Pendarovski also said that the rot in the judiciary is way deeper than just removing 15 to 20 judges. He called for international mentorship of Macedonia’s judiciary. For his contribution in making matters worse, Pendarovski quickly signed the scandalous PPO law on state prosecutors that was rammed through Parliament in an unheard of repeat vote. The law would increase the power of the ruling SDSM party in appointing prosecutors, including presumably Ruskoska. Pendarovski defended the law by saying that international experts wrote 80 percent of the law.