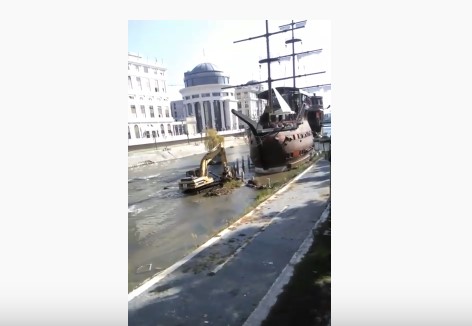 As the city of Skopje is now led by politicians who were bitterly opposed to its major redevelopment plan named Skopje 2014, it was expected that much of the new plazas and official buildings will go in disrepair and will be poorly maintained.

One of the neglected new features of the city are the three restaurant boats built on the Vardar river. One of them in particular often has debris, plastic bottles and other junk thrown in the river, piled up on its bow. So, it was a welcome move when a small digger was seen in the river the other day collecting the trash in front of the boat.

But, while the citizens of Skopje probably expected to see the junk collected and removed from the river altogether, the digger operator simply placed it deeper into the river, hoping it will be carried downstream. The scene was captured by shocked passerbys.