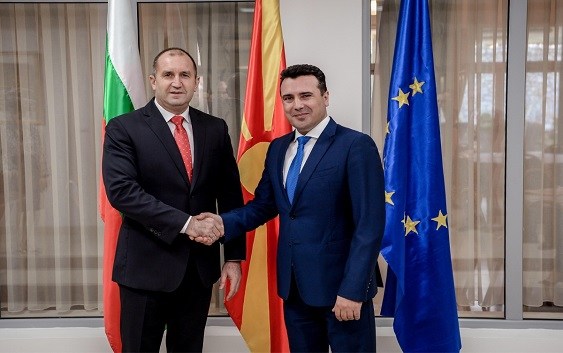 Bulgarian President Rumen Radev sent a request to Macedonia to report on the rights and the position of the ethnic Bulgarians in Macedonia. The move comes as various political sides in Bulgaria are putting more pressure on Macedonia and as a Bulgarian association from Bitola made a request for mass issuing of Bulgarian passports to Macedonians.

More than 100,000 citizens of the Republic of Macedonia have Bulgarian citizenship, which they obtained on their own free will, by declaring that they have a Bulgarian ethnic origin. Thousands more are being processed. I expect these facts to be reflected by the Macedonian authorities as they respond to the alarmingly growing hate speech against Bulgarians and Bulgaria. Bulgarians in Macedonia must have equal rights as all other citizens of that country, in line with the highest international and European standards, Radev said.

His Socialist Party is in close competition with the conservative GERB party led by Prime Minister Boyko Borisov ahead of the elections next week, and both have played tough on the Macedonian issue as Bulgaria vetoed the opening of accession talks for Macedonia.

Meanwhile, the Ivan Mihajlov cultural center from Bitola, which represents Bulgarians in Macedonia, called on the Bulgarian Government to begin massively issuing citizenship to all Macedonian citizens who declare as Bulgarians at the planned census. Bulgaria already has a very lax regime for giving passports to Macedonian citizens who declare that they have a Bulgarian heritage – which is a very appealing prospect for many as the Bulgarian passports allows instant access to the EU labour market.

There are people waiting in lines in front of the Bulgarian consulate in Bitola every day. Each of these Macedonians has to go in person to Bulgaria to declare their Bulgarian identity and submit their documents. Despite the massive campaign against them, these people are no less patriots. They love Macedonia more than others. They are not fascists, Tatars or a minority, but a vast community of Macedonians who preserved their Bulgarian identity. Due to massive demonization here we are pressed to declare that we are merely asking for Bulgarian passports so that we can travel across Europe with no visas. That is not true, because Macedonian citizens can travel to Europe with the Macedonian passport as well. That is why we call on the Bulgarian authorities to help us gain additional safety and a radical simplification of the procedure to obtain Bulgarian citizenship which will protect us from Bulgarophobia, the association states in its press release.

The Zaev regime intends to hold a census in April and this is the first public initiative to get Macedonian citizens to declare as ethnic Bulgarians.