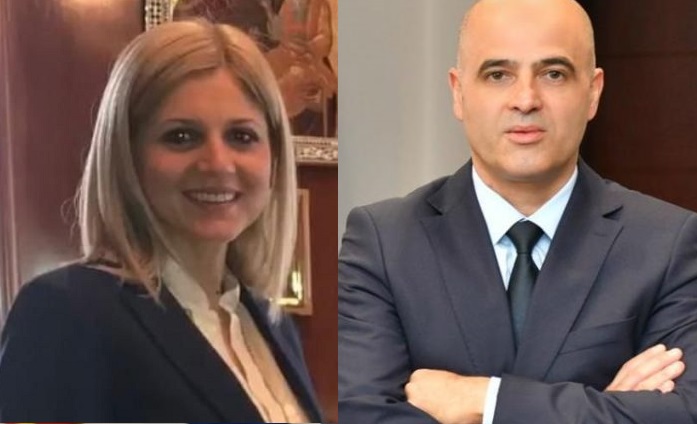 Prime Minister Dimitar Kovacevski did not answer if his wife Elena has declared a Bulgarian national identity and his office would still not answer whether she has obtained a dual Bulgarian citizenship.

The claim was made by the Bulgarian Trud newspaper, which published a certificate showing that Elena Kovacevska submitted an application for Bulgarian citizenship, citing her Bulgarian national identity. Her family comes from a majority Bulgarian part of eastern Serbia and emigrated to Kumanovo where she met and married her husband, and the application cites her family’s origin to make the claim. Bulgaria has a liberal policy of issuing passports to Macedonians who declare that they are ethnic Bulgarians, but the issue carries a lot of stigma – not least from Kovacevski’s SDSM party, which often launches campaigns attacking their political opponents of being secretly Bulgarian.

I will not comment about the ancestors of my wife, Kovacevski said in response. He said that he and his wife have Macedonian documents, but did not directly deny that she also has a dual Bulgarian passport.

Republika sent a direct question to the office of the Prime Minister, but has still received no response.
Late last year, during the local elections, SDSM initiated an extremely loud campaign against current Skopje Mayor Danela Arsovska, demonizing her for allegedly having a dual Bulgarian citizenship. Arsovska denied the allegation, but SDSM still tried to make it a key campaign issue, even drawing condemnation from Bulgaria for the lynch mob atmosphere they riled up.

Macedonia is locked in a bitter historic dispute with Bulgaria, which demands that Macedonia adopts its historic and national narrative.