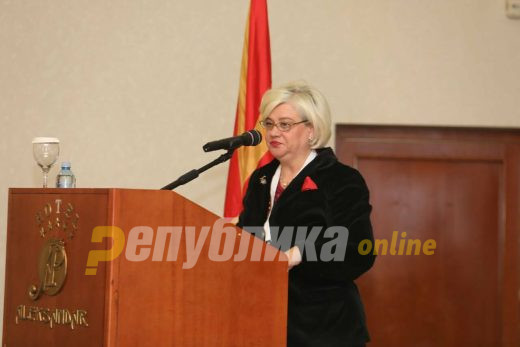 Prof. Natasa Kotlar-Trajkova spoke on the “Sto ne e jasno” show about the relations between Macedonia and Bulgaria, the denial of the character and work of Goce Delcev, as well as the government concessions regarding the national identity and the protection of the Macedonian interests.

Kotlar emphasized that the celebration of Goce Delcev and the awarding of the Goce Delcev prize must never be questioned or suppressed by silencing the big day dedicated to the greatest Macedonian revolutionary. She added that Goce Delcev had said many times throughout history that he was a Macedonian and that he himself had fought for the Republic of Macedonia and no one else, and that is why the authorities in Macedonia should not have allowed May 4 to remain unmarked.

The history of the Republic of Macedonia is accepted by the majority of countries in the world. The constitutional name of the Republic of Macedonia is also recognized. A country that has a problem with itself cannot change the history of another country, because that history is supported by facts that are written and date back much earlier, Kotlar said.