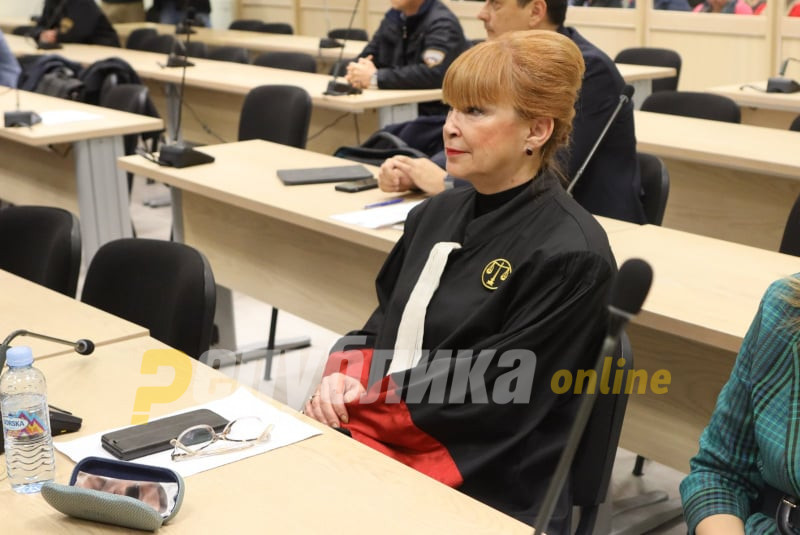 Organized crime prosecutor Vilma Ruskoska was quick to deny allegations of her own close and personal links with the racketeering suspects she is prosecuting in the trial of the decade in Macedonia.

One of the most notable moments from the first hearing came when defendant Bojan Jovanovski – Boki 13 was asked about his close links with former Special Prosecutor Katica Janeva, who he was frequently seen with in pricey restaurants across Skopje. Prosecutor Ruskoska is seeking to establish that links between the two given that Boki 13 has been recorded moving the money the group has been extorting around. But, he had a retort ready and replied that he has had lunch with Ruskoska as many times as with Janeva. The comment turned the public’s attention to the fact that the defendants and the chief prosecutor belong to the same political option, were all on the same side during the SDSM led Colored Revolution and Ruskoska and Janeva jointly persecuted VMRO-DPMNE officials to get entrench SDSM in power, before apparently turning on one another.
Ruskoska denied her alleged ties with Boki 13.

I met Boki in person when I went to be a guest on his TV channel. I’ve only been in a restaurant with him when I was present at the celebration put together by his 1TV. That is all as far as our friendship goes. I’ve known his mother since the first grade, though, Ruskoska said.

Boki 13 allegedly used 1TV as one of the vehicles to move the money he was extorting from businessmen as he was forcing the targets to purchase overly priced ads on the television. Janeva’s son Lazar Janev was a top manager at the television, and joined Boki 13 when they were forcefully presenting media campaigns to companies whose owners were “not allowed to refuse” the deal.

Ruskoska was also asked about Boki 13’s cryptic comment that his own security cameras filmed the persons who took the money he extorted and that the final destination of the bags with money will be revealed during the trial. Many are speculating that the bag of money given to Boki 13 by businessman Jordan Orce Kamcev were equipped with a GPS tracker and also, that extortion of such scale could not be conducted without the knowledge and participation of top Government officials,

I’m not sure if the forensics investigation in this case has been completed yet. It will be good to know where the money ended up, Ruskoska said evasively. Ruskoska was walking on eggshells regarding the allegations of involvement of top SDSM party officials in the racketeering and the public is eagerly expecting to see whether Janeva’s trial will lead toward Zaev and his inner circle, or if the entire blame will be laid at the feet of Janeva and Boki 13.