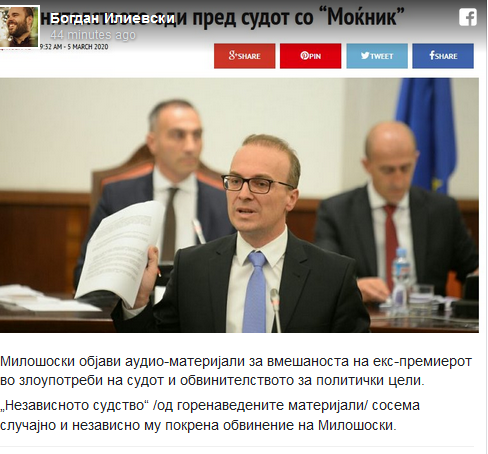 State prosecutors announced that they have completed their investigation into yet another VMRO-DPMNE member of Parliament – Antonio Milososki – and are ready to file charges against him. The move comes as Milososki is one of the most prominent oppositon members, and has held two press conferences revealing evidence that SDSM party leader Zoran Zaev was right at the center of the Racket scandal and, ironically, wielded huge influence over state prosecutors and the judiciary.

The charges against Milososki stem from the cache of wiretaps that Zaev has been using since 2015 to grab power. The investigation was first announced by the now completely discredited Special Prosecutor’s Office, which was used as Zaev’s private investigative force to go after VMRO-DPMNE officials. They charge Milososki of using his influence to secure the sale of a run down official building in the remote, rural municipality of Plasnica for 50.000 EUR to his father. This put Milososki at odds with the powerful Mayor of Plasnica Ismail Jahoski, the owner of the Pucko Petrol company that is grabbing record numbers of public procurement contracts due to Jahoski’s proximity to the DUI and SDSM parties. Milososki is also being charged for allegedly proposing to the Lustration Commission to look into a local judge, who was a collaborator of the Communist era secret service.

The independent judiciary completely independently decided to file charges against Milososki as soon as he published the audio leaks, said conservative activist Bogdan Ilievski after this latest case of political abuse of the judiciary in favor of the Zaev regime was announced yesterday.

Meanwhile, the Zaev regime rammed a law through Parliament that would protect SDSM office holders from having wiretaps used as evidence of corruption against them – exactly the type of wiretaps Milososki has been revealing over the past weeks. But the cache that Zaev and the Special Prosecutor’s Office have been using since 2015 is apparently still considered as legitimate source for charges against Zaev’s political opponents.