A verdict in a deadly traffic accident sparked outrage yesterday when the Skopje court gave merely a suspended sentence to the driver who killed a man on a motorcycle in 2018 and badly injured his pregnant wife. The woman lost the baby.

The 62 year old driver, who is a businessman from Tetovo, made an illegal turn and crashed into the motorcycle. The widow, Natasa Dimitrievska, said that she is outraged by the verdict of judge Elena Josifovic, who insisted that the sentence is light because the driver confessed his culpability. 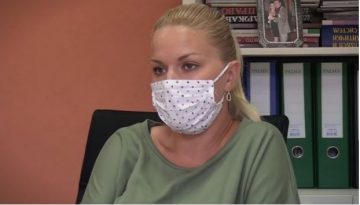 The President of the Skopje criminal court Ivan Dzolev refused to comment on the sentence. The opposition VMRO-DPMNE party said that the sentence is outrageous and proves how badly eroded the Macedonian judiciary is.

Just as news of the verdict was breaking yesterdau the head of the Academy of judges and prosecutors Natasa Gaber Damjanovska revealed on her social media account that she was also nearly ran over in downtown Skopje. Gaber said that she had to jump out of the way of a speeding vehicle at a notorious crossing in downtown Skopje.