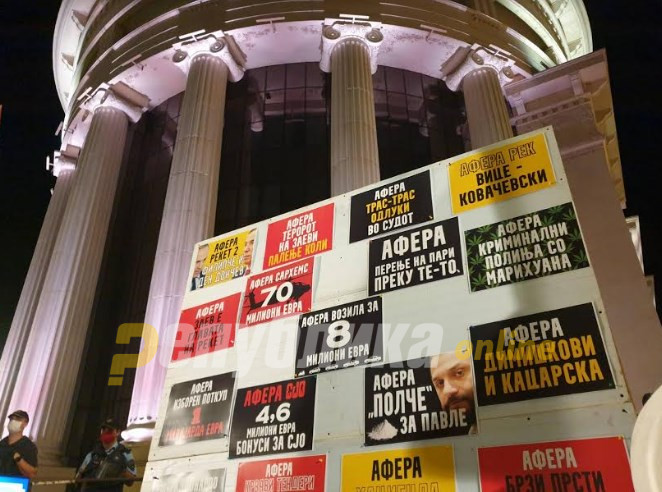 The Transparency International report which places Macedonia at its historically worst ranking of 111th in the world in fighting corruption is proof about the criminal nature of the Zaev Government, VMRO-DPMNE said in a press release.

We took the country over in 2006 and when Macedonia was ranked at what was then considered shameful 105th place in the world, and by 2010 we managed to elevate it to 67th. That was our historic high so far. Now, between 2017 and 2020, SDSM have again brought us down 21 places in the ranking, in the company of some of the most corrupt countries in the world, said top VMRO official Trajko Slaveski.

The opposition party outlined the main scandals that brought the country to this low point. One of them is the purchase of air traffic control equipment from the Italian Leonardo company. A leaked audio recording showed Dragi Raskovski, former Secretary General of the Zaev Government, instructing officials of the state run air control company to sign the contract, even as he acknowledged that there are problems with the offer. Raskovski ineptly defended himself in public but the prosecutors were there to save him from the scandal as they decided not to file charges – a typical move when it comes to top SDSM party officials.

In another exceptionally brazen case, Zaev himself acknowledged that he instructed the Tetovo municipal council to change the urban plans to allow for a huge residential development by a controversial businessman from Montenegro with extensive Russian ties. Again an audio leak showed that the businessman was meeting Raskovski (again) and paid for the privilege, and is offering a large stake in the future development to someone higher in the Government (presumably Zaev). Zaev bragged about influencing the deal AFTER the tape was leaked.

Evidence: Raskovski and Zaev made decision to sell SIK Jelak in Tetovo, for which Daka claims to have given a bribe of 300,000 euros

Direct involvement by Zaev’s businesses in crime percolated down to the lower levels, such as granting money to Zaev’s companies by the notoriously corrupt Innovation Fund, which, under this Government, was turned into little more than a slush fund for the ruling party.

Innovation Fund defends itself from allegations it gave 210.000 EUR to a company linked to Zoran Zaev

But at the top of the corruption chain is obviously the Racket scandal, which felled Special Prosecutor Katica Janeva and again required a “see no evil” approach from the prosecutors who stopped short of investigating Zaev himself, despite extensive evidence indicating that he gave Janeva political cover to go after businessmen and extort them for all they are worth.

The crisis with high level crime, extortion and corruption is influencing the overall prospects of the country. While nominally Macedonia is blocked from opening EU accession talks by Bulgaria (after Greece and, briefly, France), the unchecked corruption evident in reports such as the one from Transparency International is becoming more of issue in broader EU circles. In a recent interview Dutch Ambassador Dirk Jan Kop said that in Macedonia corruption is apparently a state of mind for the entire society, from top level cronyism and crime in public procurement, down to judges and mayors and even down to the common citizens who bribe doctors and teachers. “It is sad to see that even heads of national parks are politically appointed”, said the ambassador of one of the more enlargement skeptic EU member states.