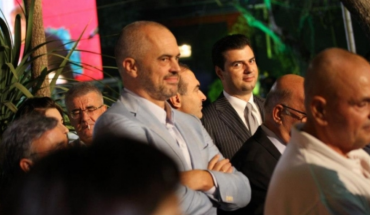 Albanian Prime Minister Edi Rama stood up Macedonian President Stevo Pendarovski, who was visiting Albania to discuss the snub both countries received from the European Union.

Pendarovski met with his host Albanian President Ilir Meta and was supposed to meet Rama, but Albanian media report that the meeting was cancelled with just half an hour to ho, with little explanation. The Ora News site reports that Rama left a very poor impression on the visiting Macedonian delegation with his move, especially given the sensitive timing for both countries.

Rama had a confrontation with Pendarovski over the EU accession talks before. Pendarovski promoted the idea of separating Macedonia from Albania, which would clear our path toward opening EU accession talks and possibly joining Serbia and Montenegro in a more advanced group. But Rama publicly rebuked Pendarovski, reminding him that he owes his electoral win to the votes of Macedonian Albanians, which led to a climb down from Pendarovski.

After being called out by Rama, Pendarovski now sees Macedonia’s EU accession as “intertwined” with that of Albania

“VMRO has every right to push for impeachment of President Pendarovski”

Bulgaria starts with the blockades, disputes the Macedonian language in Frontex

Online sessions only possible by changing the Constitution

640 new cases and as many as 12 deaths. And the law on infectious diseases in which Filipce swears is not for the sick but for competencies and procedures, the leader of VMRO-DPMNE, Hristijan Mickoski wrote on Facebook. But they did not miss the opportunity to point out the culprits and make politics....
Macedonia 22.10.20 | 21:03

Bulgaria starts with the blockades, disputes the Macedonian language in Frontex