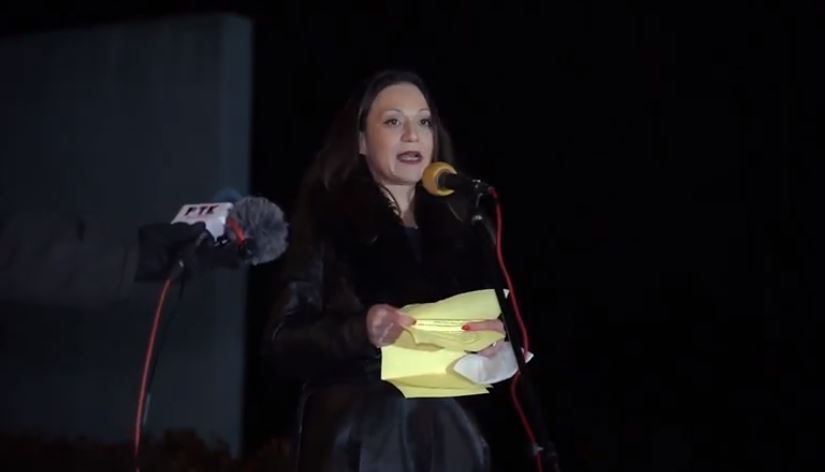 Rasela Mizrahi spoke from the near-by village of Vatasa, the site of a massacre of 12 youths by the Bulgarian forces in 1943, during the series of protests held today. Protesters gathered in seven cities to denounce Zoran Zaev’s surrender in the dispute with Bulgaria, which includes revising Macedonian history to downplay massacres such as Vatasa – where Bulgarian forces ordered the murder of suspected partisan sympathizers.

I want to live in Macedonia, but under a system of values much different from the values Zaev upholds. I want to live in the Macedonia where I learnt about life, about honor, dignity and unity, in a country that is proud of the partisans who gave their lives for Macedonia. Zaev is trying to give away everything we have left from the Ilinden Uprising, the NOB struggle and the ASNOM assembly. All of us must unite, above party lines, above national lines, as anti-fascists, and tell him that enough is enough, Mizrahi said.

Mizrahi is the first Jewish member of a Macedonian Government, appointed by VMRO-DPMNE in the broad Government put in place ahead of the July 15 elections. She was promptly removed from office by SDSM, after an anti-Semitic campaign, for her refusal to use a sign with the imposed name “North Macedonia”. Her family is one of the very few surviving Jews in Macedonia, and the issue of revising the Holocaust and Bulgaria’s role in the deportation of the Jews from Macedonia to Treblinka is one of the thorniest issues that is on the table now.

Citizens of Vatasa, the site of a horrific 1943 massacre, angry at Zaev’s surrender to Bulgaria