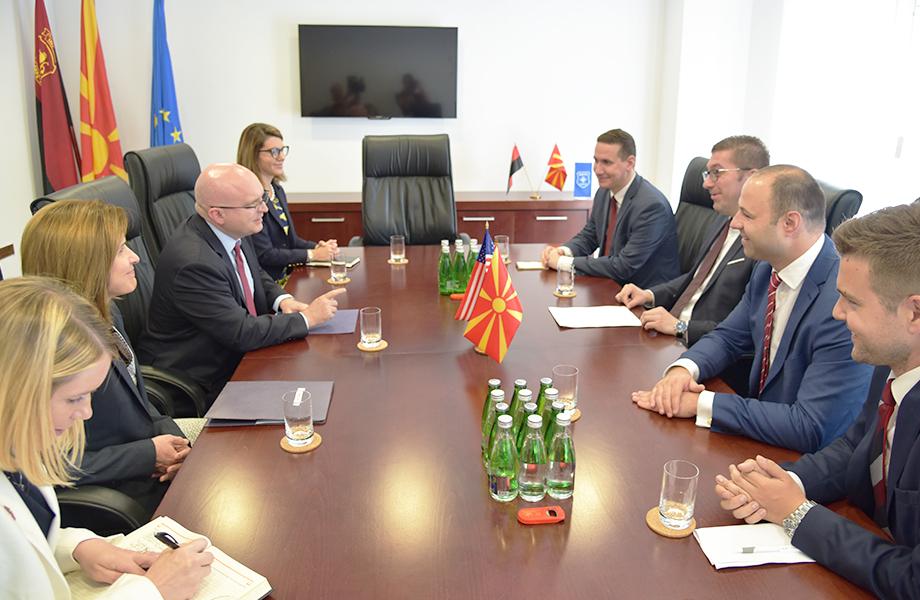 US diplomatic envoy Philip Reeker repeated his call that the opposition VMRO-DPMNE party must be constructive with the proposed law on state prosecutor, even after the major scandal involving the still acting Special Prosecutor Katica Janeva and the ruling SDSM party.

It is up to the forces in this country to not play games, move constructively together for the future of the country, Reeker said after his meeting with VMRO-DPMNE leader Hristijan Mickoski.

Mickoski had a press conference before the meeting with Reeker, but after Reeker’s joint press conference with Prime Minister Zoran Zaev, during which he announced that VMRO has prepared its own draft law on state prosecutors which will be presented shortly. The opposition party insists that the new law, as proposed, would keep Janeva’s handpicked team in place despite the allegations of rampant abuse of office and extortion of millions from businessmen she was taking to court.

Zaev today initially said that, unless his version of the law is adopted by early September, when Janeva’s term in office expires and when the EU will expect to see some commitment to the fight against corruption, he will have the law pushed through using “unwanted measures”. Later today Zaev said that he will examine the VMRO-DPMNE proposal.

Reeker said that the US supports and lobbies for Macedonia to open its EU accession talks, and that the law on Special Prosecutors is important in this regard. He did not mention the huge corruption scandal involving precisely the team and the ruling party who were being presented internationally as fierce fighters against corruption until just weeks ago.