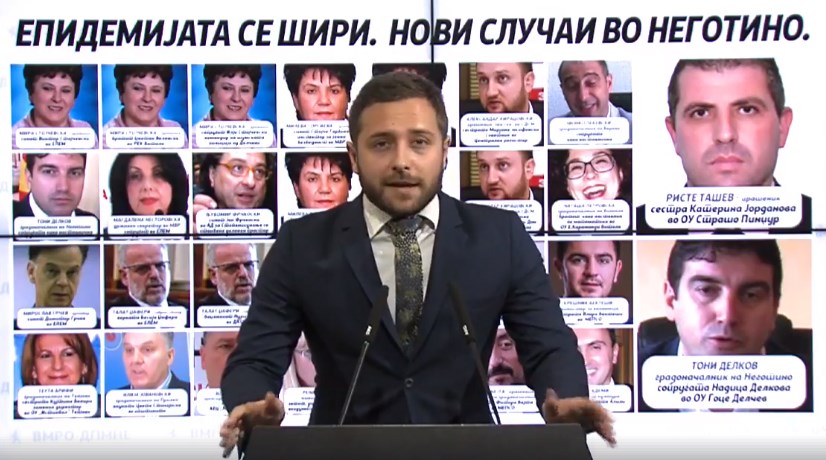 After the mass hiring of relatives of SDSM and DUI officials in the public sector caused outcry, some of them followed Zoran Zaev’s order and resigned today. But, for each of those who resigned, the opposition VMRO-DPMNE party revealed additional cases of nepotistic hirings.

Fanija Kostadinova, mother of SDSM member of Parilament Kostadin Kostadinov, resigned today from the Central Registry office in Strumica, where she was hired only recently. Kostadinov is also a spokesman for SDSM and it was untenable for him to avoid questions from the media about this case of nepotism. Kristijan Misovski, son of member of Parliament Goran Misovski, also resigned today from the state Agency for Insurance Supervision.

But, at a press conference held by VMRO-DPMNE, it was revealed that other relatives of SDSM officials were being hired just as Zaev was promising to investigate the cases of nepotism and calling on the first batch of nepotistic hires to resign.

VMRO spokesman Dimitar Arsovski called out SDSM member of Parliament from Negotino Risto Tasev, whose sister was employed in the local elementary school. It’s the same town where Mayor Toni Delkov, also from SDSM, had his wife hired in another elementary school.

And in Skopje, Gjorce Petrov Mayor Aleksandar Naumoski had his close relative Miroslav Naumoski hired also in the Central Registry office, the A1on news site reported. Naumoski insisted that his cousin, who lives in the same house with him, is well qualified for the job and that he didn’t influence the hiring process in the coveted, well paid job.

As opposition leader, Zoran Zaev famously promised his supporters, in a video taped speech, that once he is Prime Minister all public sector jobs “from the cleaning lady to the top director” will be SDSM loyalists. And Public Administration Minister Damjan Mancevski endorsed the practice, saying that SDSM partisans were allegedly discriminated in the previous period and therefore now is their moment to make up the lost time with patronage.