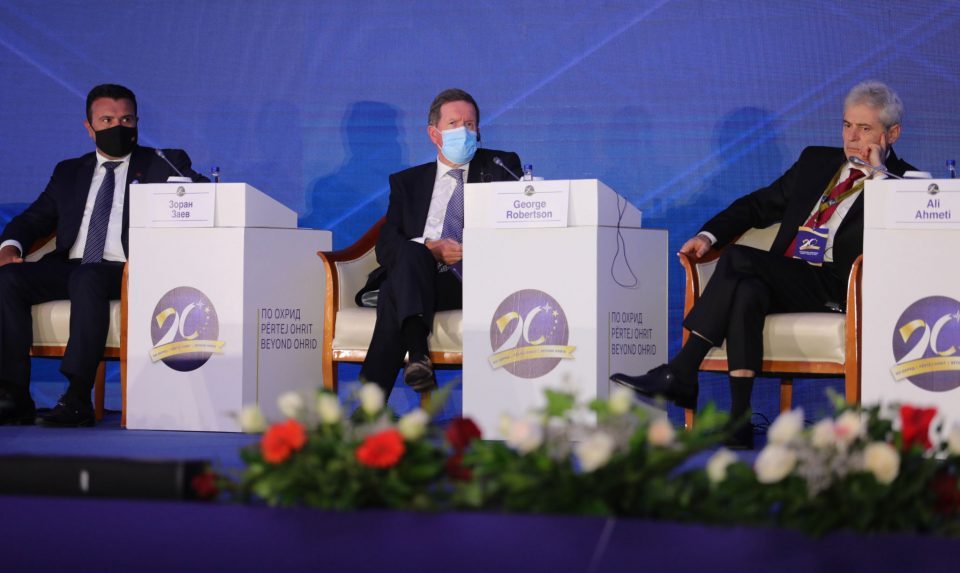 There are too many agreements in history, but what people really want is jobs, good education for their children and hope for the future. It must be a step forward from the Ohrid Agreement, it is our duty, former NATO secretary general, Lord George Robertson said Friday addressing the conference in Skopje marking the 20th anniversary of the Ohrid Framework Agreement.

I think the world, Europe and the Balkans have underestimated the way the Ohrid Agreement sets an example, a model for resolving conflicts. It has its imperfections, small, we do not think it is perfect and there will still be people who will think that we have given them too much or received too little. Both of these views are on the wrong side of history. Consensus, compromise and balance, tolerance may not be modern in a world leaning towards being authoritarian, but they are the foundation of the prosperous, contented and peaceful democracies that most people love and long for, said Robertson who participated in the creation of the Framework Agreement.

He also referred to NATO membership, which enables, he says, a secure future for the country, but also the readiness for EU membership.

When Bulgaria sought EU and NATO membership, they had good friends in me and in NATO headquarters. Bulgaria as a neighbor had a huge benefit from this Ohrid Agreement. If the conflict had continued in the traditional way as it ends in the Balkans, Bulgaria would have felt those waves and will still feel them to this day. Today’s EU is made up of countries that have been hostile for years and centuries. But the triumph of our age is that these enemies today sit together in this incredible union of free and integrated countries. Macedonia deserves to be there and I hope that Bulgaria will hear the unanimous demands of their friends and lift the blockade of Macedonia’s EU process, he said.

VMRO-DPMNE: Ohrid Agreement celebration turned into a party event, that’s why we didn’t attend it