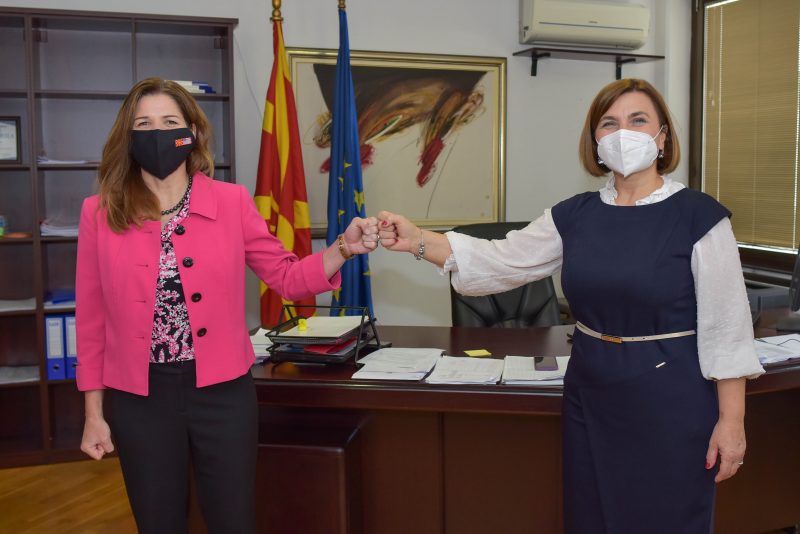 The Minister of Labour and Social Policy Jagoda Sahpaska met Wednesday with the US Ambassador to the Republic of Macedonia Kate Marie Byrnes.

Sahpaska and Byrnes discussed about the need for further close cooperation in the development and advancement of Macedonian society especially in the field of inclusion and equality, Ministry of Labour and Social Policy said in a press release.

Sahpaska thanked the United States for the support to our country since its independence, especially in the Euro-Atlantic process and our joining to NATO as the 30th member.

She highlighted that as Minister of Labour and Social Policy she has a number of priorities to focus on in the coming period.

We will actively work with the vulnerable categories of citizens, with the poor and marginalized groups, with the young people…After taking up office, we have proposed the Law on Prevention and Protection against Discrimination, which I think is very important to be adopted as soon as possible. We are focused on legal solution on prevention of violence against women, gender equality is high on our agenda, and we are firmly committed to social reform, especially in the area of decentralization and deinstitutionalization of social services. We will also hold dialogue to amend the labour regulations, which will lead to adoption of a legal solution, Sahpaska said.

Byrnes voiced satisfaction that the Draft Law on Prevention and Protection against Discrimination was put into procedure for such a short period of time, expressing hope that the Parliament will adopt it as soon as possible.

She also noted that now Macedonia and the United States are NATO allies, adding that mutual cooperation will be enhanced.

Interlocutors underlined that the mutual cooperation, in the coming period, will focus on fight against corruption, youth policies that will mean keeping young people in the country and opening new perspectives for them, as well as economic growth.

They agreed that the two countries will cooperate in the coming period, especially in providing necessary support to Macedonia aimed at ensuring sustainable development and progress.

Bekteshi-Byrnes: US is Macedonia’s strategic partner, economic support key for development and stability

Besimi-Byrnes: Opportunities for deepening economic cooperation with the US

Kovacevski informed Byrnes that as soon as he becomes Prime Minister, he will immediately invite Petkov to a meeting