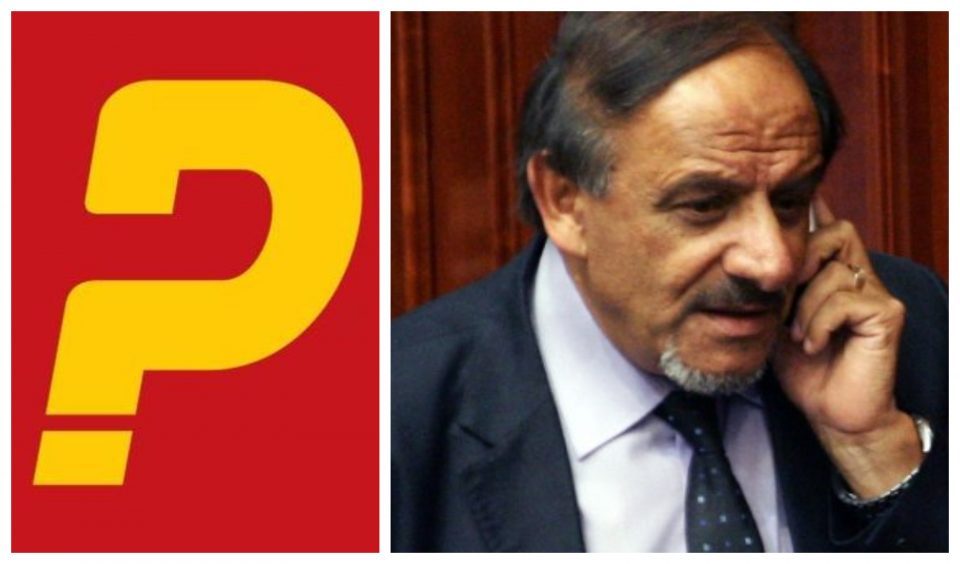 Samka Ibraimovski, leader of the PCER Roma emancipation party, threatened to sue Republika for an alleged insult. In reality, Ibraimovski’s threat comes from his mistaken reading of a social media post.

Ibraimovski was incensed after commentator Milenko Nedelkovski posted an insult aimed at him and another Roma leader Amdi Bajram, calling them both “the biggest Gypsies of all Gypsies”. The word is often seen as a slur for the Roma community, and Milenko was responding to Bajram’s refusal to condemn the use of the term by Dragi Raskovski, Secretary General of Zaev’s Government. Bajram was asked about the slur and clearly indicated he prefers to maintain his coalition with the ruling SDSM party than criticize Raskovski for his use of the word in a secretly recorded rant which included Raskovski’s theory about the cultural inferiority of southern races.

The PCER party reacts regarding the comments from Milenko Nedelkovski, published on the Republikanews site, in which he calls the PCER leader, who is a current member of the Parliament of the “REPUBLIC OF NORTH MACEDONIA”, a THE BIGGEST GYPSY OF ALL GYPSIES. As party leader, Samka Ibraimovski will take action in accordance with the Constitution and the laws of the state, because Milenko Nedelkovski’s intent is clear. Insults from Nedelkovski toward the Roma never cease. This time we will file criminal charges against Nedelkovski and the Republika news site, because the news site should have verified first what kind of a news it is, before responding to it, the PCER party press release states, before citing articles of journalist code against discrimination and threatens to notify a number of state institutions. 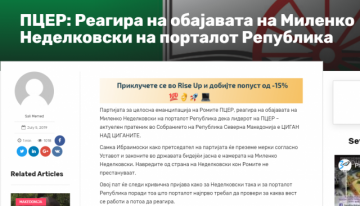 In reality, Milenko Nedelkovski, like hundreds of other Facebook users, posted a screen grab of our photograph and news title and added his own commentary. He could have just as easily used the same story from a different news site as many other sites carried Amdi Bajram’s statement. Milenko Nedelkovski does not publish articles on our news site. 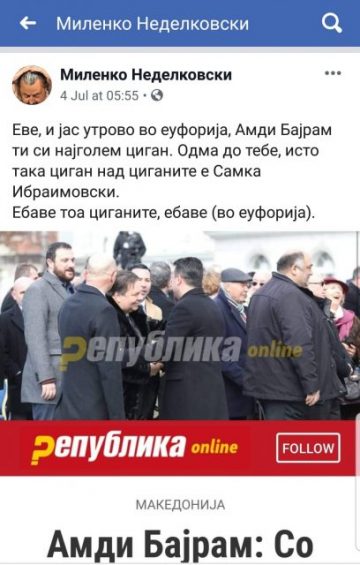 PCER threatens Republika and demands that we verify reports before we publish them. Likewise, we ask that PCER checks the facts before issuing a press release. Republika.mk has never had or will have a discriminatory attitude toward minorities or marginalized communities.

A bit of free advice on our part to PCER – if you want to protect the rights of the Roma, you could file charges against Dragi Raskovski, the man who was recorded calling Italians – Gypsies. Stop being a subservient coalition partner, and stop being afraid to rock the boat. Show that you fight for the honor of the Roma, instead of fighting for media access. We agree, it’s time for hate speech to end, and that is something you should tell Raskovski in his face. In the same court where you said you will take us.