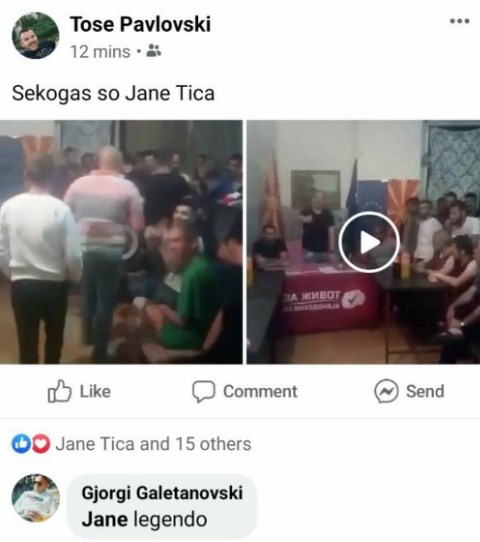 Shocking footage was shared from the Idrizovo prison in Skopje. A gathering of mostly Roma prisoners, led by Jane Tica, a well known local criminal, was held under SDSM party symbols and in it the prisoners pledge to work for the ruling party.

From today on I’m in SDSM. I send my regards to Zaev, Sekerinska, Zaev’s brother Vice, the prison warden and Jane Tica who welcomed us here and said that there will be justice for the Roma, one of the prisoners declares after saying “we will beat up the VMRO”.

The message of the meeting seems to be that the prisoners can expect early release if they support SDSM at the coming elections. Macedonia allows prisoners to vote, and SDSM already introduced one broad amnesty that was also seen as an exchange for votes. SDSM also gave tailor made amnesties to people it politically persecuted in cases when it needed something in exchange, mainly votes in Parliament.

We give our word that we, the Roma, will vote for SDSM, but we also want something in exchange, a prisoner says.

While producing outrage in the public, the video was also greeted by prominent SDSM officials. One of the party’s main organizers in Skopje, Georgi Galetanovski – Combe, who SDSM made director of the Skopje ZOO, praised it on his Facebook page and sent his regards to Jane Tica for organizing the event.