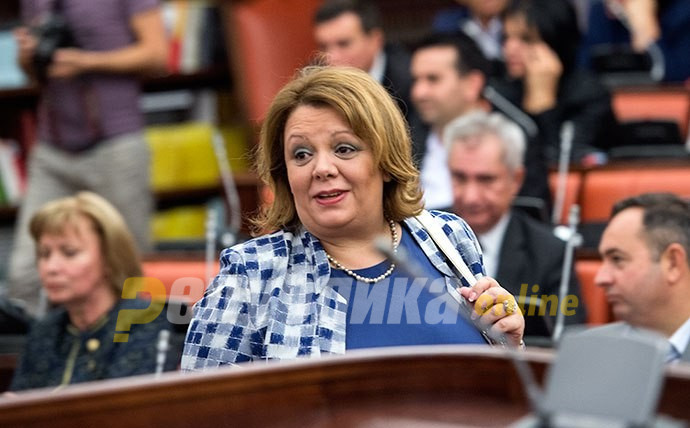 VMRO-DPMNE members of Parliament proposed a start to the discussion on dismissing disgraced hat Special Prosecutor Katica Janeva from her office, but the proposal was rejected by the most members from the ruling SDSM and DUI parties.

The two ruling parties previously supported the Committee proposal to dismiss Janeva, but now surprisingly voted against finishing the job. This means that Janeva, who offered resignation twice in the past two months, will officially remain Special Prosecutor until September 15th, when her mandate expires.

This will be the last session of Parliament before September 15th. With its vote, the Government deliberately avoided dismissing Katica Janeva and sent a clear signal that she is still under the Government’s protection, said Nikola Micevski, head of the VMRO-DPMNE group in Parliament.

Member of Parliament Antonio Milososki, who attended failed meeting of political leaders on Tuesday, said that the vote in Parliament shows that Janeva is likely blackmailing the Government.

VMRO-DPMNE proposed that the Parliament dismisses Janeva, in accordance with the recommendation by the Parliament Committee and the Council of public prosecutors. Janeva is in detention, is charged with racketeering, and yet she continues to issue orders from prison which is against the law. And still, 58 members of Parliament rejected our proposal. It’s would be interesting to know what sort of an arrangement does the suspect have with the Government, to keep her under its protection? Is it the many secrets that Katica Janeva keeps, since she can name which Government officials were involved in the racketeering?, Milososki said.