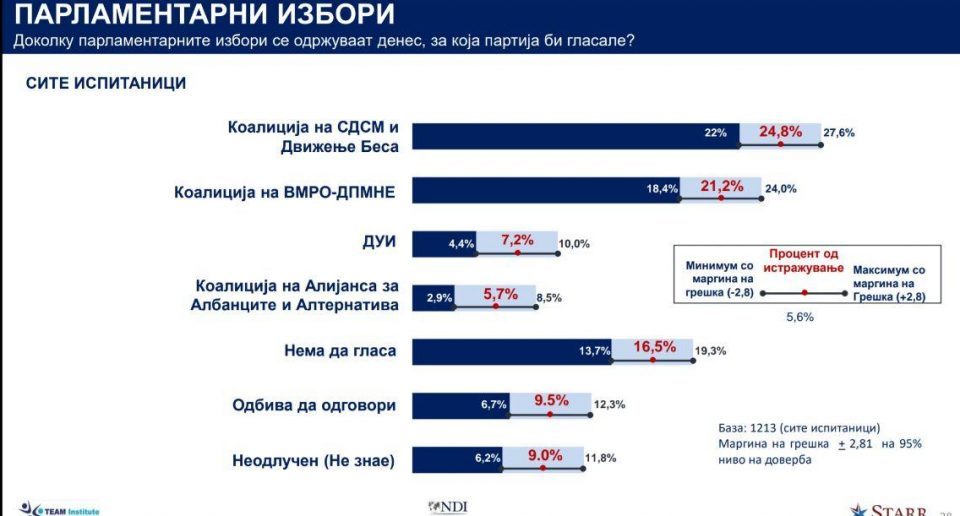 The US National Democratic Institute commissioned a poll from the Team Institute, a group whose polls frequently favor the ruling SDSM party. The poll shows SDSM and its coalition partner BESA ahead of VMRO-DPMNE by 3.6 points, but when put together the replies amount to just 93.9 percent.

The poll shows the results with the margin of error, showing that SDSM and BESA can win between 22 and 27.6 percent of the vote, while VMRO ranks between 18.4 and 24 percent. Among the solely Albanian parties, DUI ranges between 4.4 and 10 percent and the Alliance of Albanians is at a range of 2.9 and 8.5 percent.

NDI, Team and Starr research say that they conducted their poll in mid June, using interviews with over 1.200 citizens. A notable data point shows a large increase in the number of voters who believe that the country is heading in the wrong direction. It now stands at 44 percent, 11 points higher than in March. Just 29 percent of the voters believe that Macedonia is going in a right direction and 26 percent are neither here nor there. The results were 30 (right) – 35 (neutral) – 33 (wrong) in the previous poll conducted in March.

SDSM has a history of pushing fake polls ahead of elections, and Team Institute has frequently played along. After the disastrous September 2018 referendum, when barely 36 percent of the voters showed up even after polling agencies reported for months that the turnout will be above 50 percent, Team Institute quickly did a poll trying to whitewash the failure. Even as other pollsters were quiet, after making fake predictions, the institute’s post referendum poll claimed that 46 percent of the citizens want the name change process to go ahead and that only 32 percent said that the turnout was under 50 percent and the referendum was a failure.