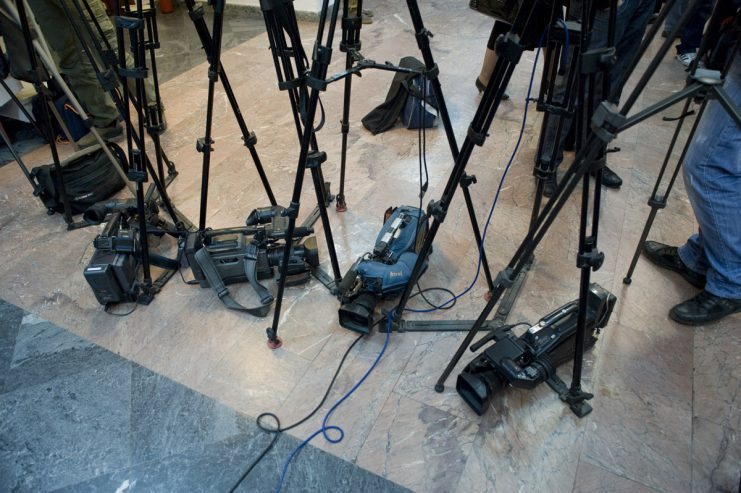 The Macedonian Association of Journalists (MAN) called on the police to immediately identify the anonymous Facebook commentators who directly threatened a group of investigative journalists.

The incident occurred as several news outlets, such as Lider and Infomax, are publishing revelations of corruption and gross incompetence on the part of the Government.  These revelations included the leaked audio recording of Dragi Raskovski, the Secretary General of Zaev’s Government who was recorded giving instructions with regard to a public procurement worth 7.7 million EUR. Zaev was holding a press conference on Tuesday to explain another highly damaging leaked scandal, the tapes recorded by Russian pranksters Vovan and Lexus, when somebody took a picture of several journalists who have performed critical reporting about the actions of his Government.

These included Lider’s Ljupco Zlatev, who published some of the Raskovski tapes and a tape in which an SDSM Mayor is heard torturing a man; Infomax’s Aleksandar Mitovski, who was verbally assaulted by Zaev recently, and Aleksandar Spasovski from Sitel TV. The photograph was published by a large Facebook group which loudly supports SDSM positions and it included the home address of Zlatev’s parents. This was seen as a direct threat against the investigative journalists and the message included denigrating comments about the three, while SDSM supporters poured in the comments to threaten the journalists with being arrested or worse.

We call on the ruling party to put a leash on its party bots operating on the social media and to end the public harangues and threats it aims against the journalists and their families. We call on the Interior Ministry to urgently get to the bottom of this case, no matter who the person who ordered the threats is. We also call on all the journalists who have been subjected to threats and political pressure to come to us, as the MAN legal team is at your disposal, the association said in its press release.

According to MAN, it is hypocrisy that the information Minister Robert Popovski and the Foreign Minister Nikola Dimitrov went to London to sign a global pledge about the freedom of the media at a time when journalists critical of their Government are being threatened. MAN adds that it has informed international organizations tasked with protecting media freedoms about the threats.