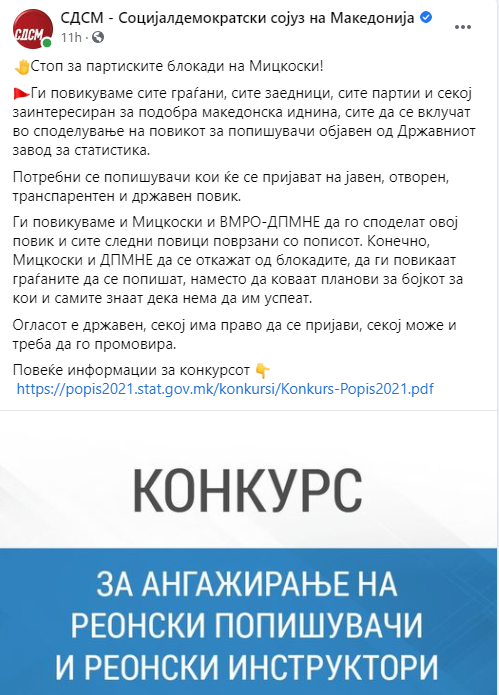 After being called out in the public, the SDSM party began deleting posts it shared on its social media sites, calling on citizens to register for the census teams. The census that SDSM plans to hold in April is controversial as is, because of the decision to count emigrants as actual residents – which is a key request of the Albanian parties eager to boost the Albanian share of the population. Additionally, holding a census in the midst of the coronavirus pandemic and the lack of security measures that would guarantee the accuracy of the data, led to broad criticism of the push.

On top of it all, having a political party call on its supporters to apply for places in the census teams added to the criticism. After numerous SDSM branches shared the call earlier this week, and were criticized for it, yesterday they began to delete the invitations. Instead, SDSM is calling on its chief rival VMRO-DPMNE to share the same call. VMRO criticized the census for all the reasons mentioned above and is unlikely to actively support it, let alone doubling on its politization by inviting a second group of party activists to join the SDSM activists in the census teams.