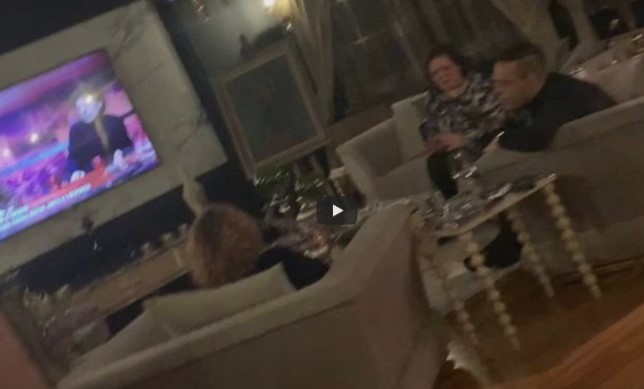 SDSM Vice President Radmila Sekerinska refused to address the publication of a video showing her at a home party with now senteced racketeers Katica Janeva and Bojan Jovanovski – Boki 13.

Sekerinska and her husband Bozidar Jankovski are close to both Janeva and Boki 13, and to their main target, businessman Jordan Orce Kamcev. A close in-law of Sekerinska was also directly involved in one of Boki 13’s enterprises, which is now the focus of a second racketeering scandal, but state prosecutors, in clear subservience to the SDSM party, refused to even interrogate Sekerinska.

Today, prodded by the Alfa television, the SDSM party responded to the latest element in the Racket scandal, with a broad denial.

Photographs and video recordings are being spread by VMRO-DPMNE for months, in an attempt to allege involvement by SDSM ministers with Katica Janeva and Bojan Jovanovski, in a failed attempt to discredit them during the campaign. The legal outcome of this process is best proof that minister Sekerinska and any other SDSM official were not involved in the case, SDSM said in its response to Alfa TV.

Janeva and Boki 13 were close to the entire SDSM party leadership, given her key role in bringing the party to power with her politically driven prosecutions, and Boki’s outspoken support for SDSM through his now defunct 1TV television. It is widely presumed that the two would not be able to extort any money, especially from a high profile businessman like Kamcev, if they didn’t have serious political backing for their actions in SDSM and the fact that the money they took were never found just added to the speculation that it was divided with the ruling party.