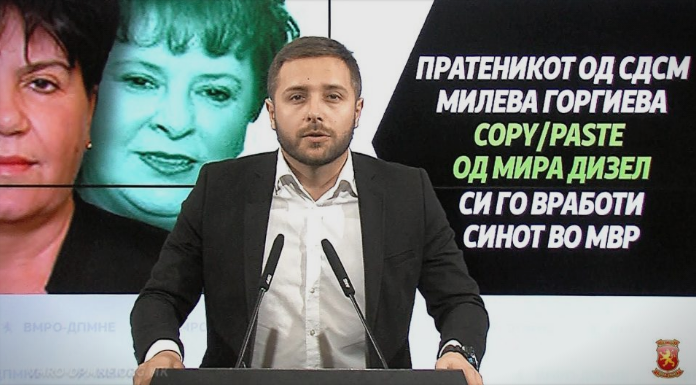 VMRO-DPMNE revealed a new case in which a member of Parliament from the ruling SDSM party influenced the public administration service to hire her close relative. After the series of scandals involving Mira Stojcevska, who had her husband, son and brother hired in a matter of weeks, VMRO spokesman Dimitar Arsovski revealed that her colleague Mileva Georgieva had her son Stojce Georgiev appointed a police inspector in her town of Radovis.

Stojce Georgiev is a high school graduate, from a pharmaceutical trade school. Under what criteria did the Interior Ministry find him qualified to be an inspector and hired him without inviting other candidates to apply for the post? Was the only criteria he met for the job the fact that he’s Mileva Georgieva’s son? Arsovski asked.

Arsovski said that the only way to put an end to the rampant nepotism displayed by the SDSM Government is to hold the early general elections which the ruling party yesterday decided to avoid.

This is becoming pathological. We face an epidemic of nepotism. There is no person in the country that doesn’t feel disappointment when seeing how sons, daughters, spouses, brothers, all sorts of
relatives of SDSM party officials are being appointed to public sector jobs. Even the SDSM members must realize by now that this is a crime cartel in power, which is only chasing after public sector jobs, procurement contracts and grants, Arsovski added.

Nepotism watch: “Mira Diesel” had her hired brother in the same company where she landed her son