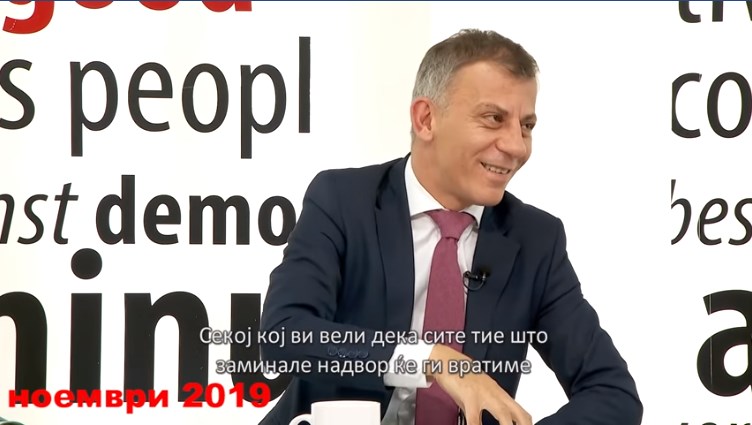 First it was Justice Minister Renata Deskoska, who earlier this week acknowledged that the 2019 amnesty law, that benefited three members of Parliament charged with “terrorism” by the Zaev regime, was adopted in order to get them to vote for the name change. And now, another of Zaev’s ministers comes out and says the quiet part out loud.

Edmond Ademi is in charge of outreach toward the diaspora, mainly working to mobilize ethnic Albanian communities across Europe and North America to vote SDSM. In a TV interview, he openly mocked the assertion that under Zaev young people who have left the country will come back home.

And yet, this was precisely a main promise Zaev made during his 2016 election campaign. While he was in the opposition Zaev’s activists from the Colored Revolution staged a tear-jerking event where they placed hundreds of pairs of shoes in front of the Government building, accusing the VMRO-DPMNE Government of driving young people out of the country. Zaev literally promised parents that he will go and bring their children back home. It was one of the most emotionally painful promises Zaev made and one that he botched most thoroughly.

They tell me, my son is in England, bring my child back home, that’s all I ask of you. This mother wants her boy back, wants his grand-children here. Let’s promise this mother, that we will brign her child back and that we will bring back all the children who left our Macedonia, was a typical Zaev campaign moment in 2016, when he was not promising to restore law and order in the country, fight corruption, reveal the truth about the 2012 Good Friday massacre or pushing some other tall tale.

Now, with early elections scheduled for April 2020, even the most loyal people in his SDSM party have stopped trying to repeat the promise or claim that Zaev reversed the dramatic rates of emigration from Macedonia.