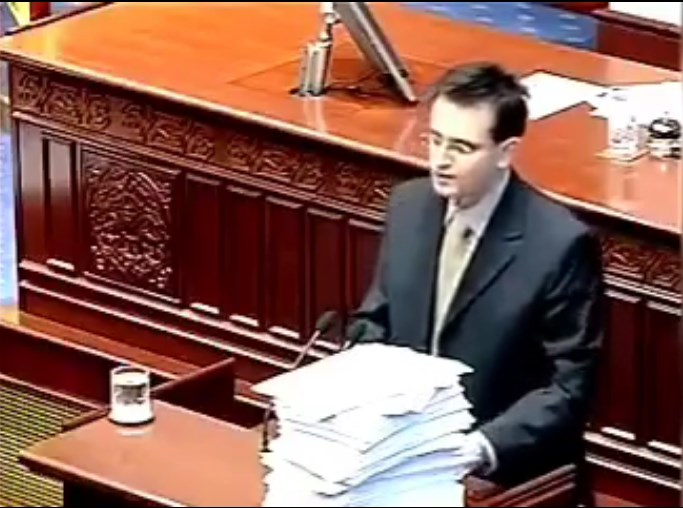 The ruling SDSM party complains that opposition parties are obstructing its attempt to unilaterally change the rules of the Parliament.
SDSM, which opted for a very narrow coalition after the chaotic July 15 elections and now has only 62 seats in the 120 seat Parliament, is trying to introduce online voting. Even though it is clearly unconstitutional and even if it weren’t changes to the rules of the Parliament are usually done only with the consent of all main parties, SDSM is pushing ahead. So the unified opposition resorted to a curious tactic – submitting thousands of pointless amendments to the proposal. As it takes a few minutes to go through each of them even if no member of Parliament attempts to discuss the amendment, it means that the debate will effectively be dragged on for weeks, and the proposal is effectively filibustered.

Most of the non-sensical amendments include a proposal to delete this word or add that one, but some were written for comic effect. “The member of Parliament working from home can only join an online session from his work study, and not from, say, his toilet”, one amendment declared.

SDSM is protesting loudly, and insists that having an online Parliament is essential to running the country during an epidemic. The opposition responds that the ruling party should’ve opted for a broader, more inclusive coalition then, and not one where every single Covid-19 case within its ranks blocks the Parliament. The opposition notes that it has supported vital legislation, such as the 2020 budget amendments, but will not support crony decisions such as the appointment of Zoran Zaev’s “favorite judge” Dobrila Kacarska to the Constitutional Court.

And VMRO-DPMNE member of Parliament Antonio Milososki noted that SDSM used the same tactic, even at times when VMRO had a more comfortable majority.

Zaev is criticizing the opposition for the amendments we proposed. Maybe he should be reminded that you reap what you sow, Milososki said, posting a picture of an SDSM member of Parliament back in 2007, when VMRO held the majority, dragging a huge pile of amendments to the floor.