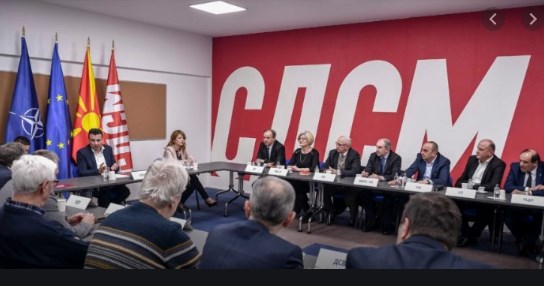 The SDSM party promptly refused the proposed resolution presented today by VMRO-DPMNE President Hristijan Mickoski. In it, Mickoski laid out positions that would be adopted as Macedonia’s red lines in the negotiations with Bulgaria.

In a typical turn of phrase when discussing the numerous concessions Zoran Zaev is making to Macedonia’s neighbors in the area of national identity and history, SDSM insists that the proposal from Mickoski somehow indicates that he and VMRO are unsure in the Macedonian national identity.

If Mickoski is sure in his identity, in the language he speaks, he would have no need to propose resolutions. The Macedonian language and the Macedonian identity are internationally recognized and affirmed and there is no need to discuss them, especially in the Macedonian Parliament, SDSM said in its statement.

Bulgaria adopted by consensus a declaration in its Parliament in 2019, in which it demands complete rewriting of Macedonian history and redefining of Macedonian national identity and the negotiations in Sofia are conducted on the basis of these demands. Foreign Minister Osmani today announced that a possible compromise solution, that would open the accession talks for Macedonia (but could lead to many other demands during the course of the negotiations) is to have Bulgaria declare its positions before the EU while Macedonia tacitly affirms them.