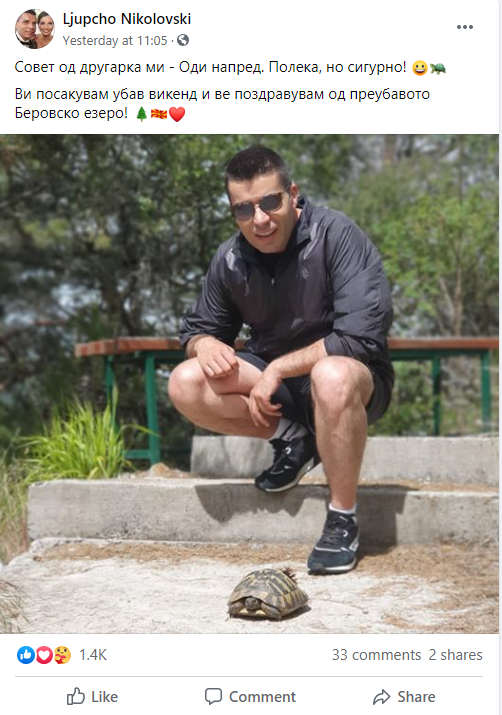 After spending weeks orchestrating a propaganda campaign against VMRO-DPMNE in an attempt to blame the opposition for the major spike in coronavirus cases – a campaign that included a police raid against opposition leader Hristijan Mickoski – official from the ruling SDSM party busy today posting pictuers from resorts and hikes across the country. At the same time when the citizens of Skopje, Tetovo, Kumanovo and Stip were ordered to remain in their homes because of the Ramadan linked spike in the epidemic, SDSM Secretary General Ljupco Nikolovski posted a picture of a turtle he met at a hike in the mountains near Berovo.

I wish you all a lovely weekend from the beautiful Berovo lake, Nikolovski told the locked in citizens in his painfully tone-deaf message. Only days before Nikolovski was defending the lockdown order with messages calling on citizens to share the sacrifice and spend yet another weekend locked in their homes.

Dozens of citizens poured in the replies to condemn Nikolovski for the greatly irresponsible message. The lockdown is already seen as a total disaster, as it just prompted tens of thousands of citizens of Skopje to flee the city for resort areas such as Berovo, possibly spreading the virus across the entire country.

Nikolovski was not alone. Skopje Mayor Petre Silegov also decided to flee the city, instead of managing the major issues a city under a lockdown faces, and went to his vllla in the ski resort of Mavrovo. Asked by the press about this dereliction of duty, he said that he considers the villa in Mavrovo as his home.