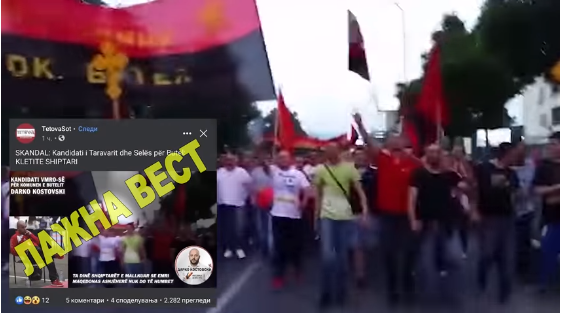 An Albanian language news site close to the ruling DUI – SDSM coalition published an edited video of VMRO-DPMNE mayoral candidate in Butel Darko Kostovski, in which a song that is insulting to Albanians was edited in.

The video shows Kostovski during a protest, where participants are singing, but the song does not mention Albanians. In the edited video, the original audio is removed and replaced with the insulting song, also recorded during some protest, in order to make it look authentic.

How low will you go with this madness?, Kostovski asked, while sharing the original video, accusing his opposing DUI – SDSM candidate Velimir Smilevski for the fake news attack.

VMRO-DPMNE has a coalition with the opposition Albanian parties AA and Alternative. Given that VMRO reliably wins the majority of the Macedonian vote against SDSM, the only way SDSM managed to keep up in the past election cycles was by winning most or sometimes all of the Albanian votes. The new inter-ethnic coalition VMRO formed threatens to nullify the only advantage SDSM has in Macedonian politics and that likely led the ruling party to preparing fake news articles that threaten to incite ethnic hatred.

One man injured in a shooting in northern Skopje