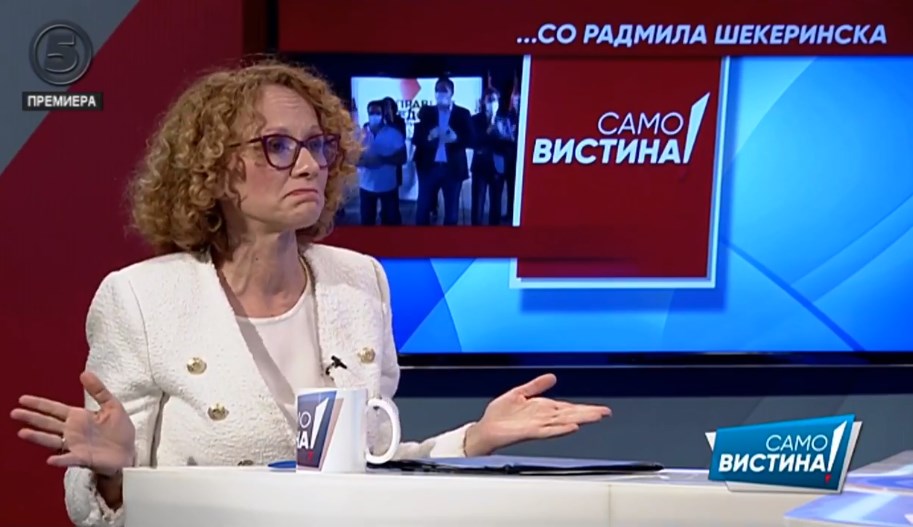 Days after the shocking video was released, SDSM Vice President Radmila Sekerinska finally acknowledged that it is indeed her filmed in the home of sentenced extortionist Bojan Jovanovski – Boki 13, with him and his co-defendant Special Prosecutor Katica Janeva.

Boki 13 and Janeva were sentenced to nine and seven years in prison respectively for extortion which they perpetrated at a time when they were exceptionally close with the top SDSM party officials. Sekerinska is shown in a secretly recorded video, from the back, as she is talking with Boki and Janeva.

Yes, we had a meeting to discuss a burning topic at the time – the failure to adopt a law on state prosecutors. I’m there in the company of a TV owner and I’ve been in the company of many TV owners, Sekerinska said during a TV interview today.

Sekerinska and her husband Bozidar Jankovski were reportedly also close to businessman Jordan Orce Kamcev, who was the main target of Boki’s and Janeva’s extortion. And while she’s professing her innocence and having just a casual relationship with both sides of Macedonia’s biggest corruption scandal, Sekerinska was named by journalists investigating the case as one of the main enablers of Boki 13 and Katica Janeva in their extortion of businessmen – where the money are believed to have ended up in SDSM party coffers and with top SDSM officials.