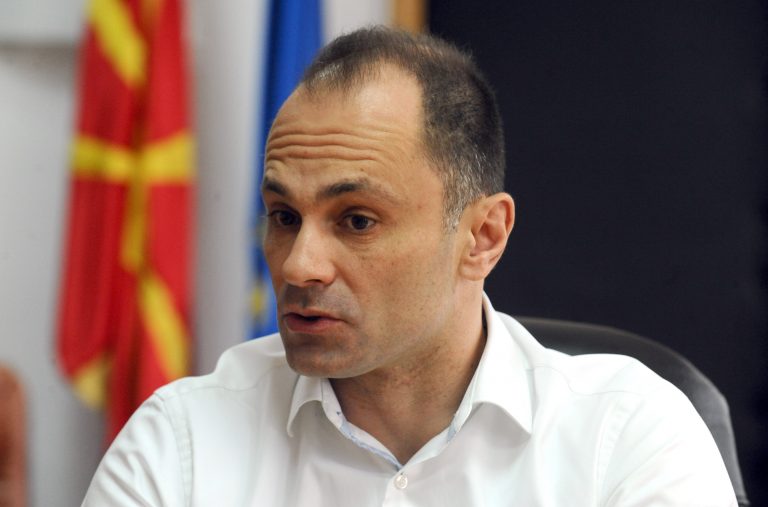 A series of distressing events in the public healthcare system raise doubts whether Minister Venko Filipce suffers only from PR problems, or is badly mishandling the department altogether.

Filipce was in hot water over the weekend when he admitted that he fake-vaccinated his niece in an attempt to disperse anti-vaccination fears. The later revelation that the girl was not vaccinated, as well as the discovery of expired vaccines which the Ministry insisted were merely mislabeled, caused widespread mistrust that Filipce is able to competently organize vaccinations. His billboard promising that Macedonians will have safe vaccines after the country joins the EU, which was an attempt to get citizens to support the name change, badly backfired as well, prompting questions whether it means that the vaccines currently in use are not safe.

In a matter of days, a number of deaths and incidents were reported in public healthcare provides across Macedonia which concerned the public. A 50 year old woman died from appendix inflamation in Skopje last week, and the Skopje Info news site reported that she was not properly taken care of because the Skopje Clinic allegedly did not have a bed available, even for such a serious case. The Ministry denied that the lack of available beds was an issue in this case.

On Tuesday, an employee of the Dentistry Clinic in Skopje was tested positive for the MRSA bacteria often associated with hospital acquired infections. Clinic director Amela Cana tried to assure the public that the employee did not pose a risk to the patients.

And further on the measles cases which caused most of the criticism aimed against Filipce, in Skopje’s Cair area, a baby aged only 42 days was reported infected with measles. So far 117 patients were reported, and all of those hospitalized with the infection are stable.

In an echo of a case which Filipce’s SDSM party used for political gain, the mother of a 20 year old girl who was treated for cerebral palsy, insists that the girl was misdiagnosed and wrongly treated. Valentina Kostoska alarmed the public that her daughter Eleonora faces daily risk of dying, but that the Minister Filipce is withholding documents that will allow her to seek treatment abroad, as Macedonia does not have a proper center for rare diseases.

– I have a signature from a consilium that the child should be treated abroad, but Filipce is hiding the documents. He is now saying that he will work to open a new center. It hasn’t been built in 20 years, we don’t have time, what are we supposed to do until then?, the distraught mother appealed publicly.
Filipce’s SDSM party organized protests accusing his predecessor Nikola Todorov of deliberately not allowing a girl from Veles to receive treatment abroad, and promised that, once SDSM is in power, children facing rare, life threatening diseases, will receive prompt treatment.

And the largest investment in the healthcare system, planned by the previous VMRO-DPMNE led Government, to build a major new expansion of the Mother Teresa Clinic in Skopje, has been postponed indefinitely. The planned site, amid the current Clinic, for which funds and international implementation were already provided, was rejected by the SDSM led Government which began to search for a new location. Filipce recently stated that work will begin this year at a new site, in Skopje’s Gjorce Petrov district. But former Transportation Minister Vlado Misajlovski said that chances that this complicated investment will begin this year are 0.

The level of deceit and incompetence in SDSM is unbelievable! You spent a year looking for a new site, and still there is no progress in the municipal spatial plan. You lie that you have prepared the construction plans. It will take at least six months after the spatial plan is finished to even begin the international bidding procedure for the new construction, a procedure which itself will take a year. Unless of course, you intend to amend the law and make it a no-bid contract, which has become the usual option for this Government. In short, you are incompetent!, Misajlovski wrote in an angry Facebook post, detailing the latest failure of the sprawling Ministry.

LIVE VIDEO: Debate on the state of the healthcare system in Macedonia