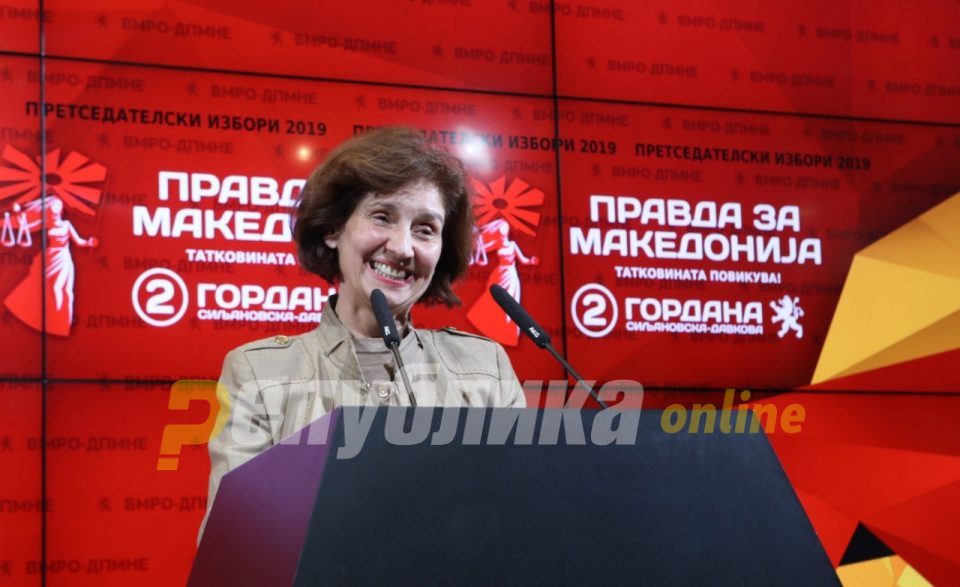 VMRO-DPMNE presidential candidate Gordana Siljanovska – Davkova sent another appeal to the conservative voters who boycotted the first round of the elections, believing that it lends legitimacy to the imposed name change.

Abstinence from voting is a modern day illness which points out to a disease of the democracy. It is synonymous with crisis in representative democracy and we see it knocking at Macedonia’s door. The people are disappointed with the holders of political power, seeing them focus on their personal interests instead of the interests of the voters. The Venice Commission recommended that Macedonia removes the turnout threshold in the second round of presidential elections. Still, I hope that we will reach the threshold of 40 percent turnout and I openly call on all those who have some issues that we resolve them now. I fully respect the reasons why voters abstain. They deserve to get answers to the issues they raised, and I hope my arguments will persuade them, said Siljanovska.

A contingent of conservative voters, many of whom also boycotted the September 2018 referendum to rename Macedonia, expected a more right wing candidate than Siljanovska, who is in the liberal center. Her ideological background may have reduced her support on the right, but it also may have contributed to a lower turnout for her leftist opponent Stevo Pendarovski, who saw a tremendous drop of support, as a more right wing opposition candidate may have counter – energized left wing voters as well. As to the burning name issue, Siljanovska is outspoken in her criticism of the Prespa treaty, and as an international law professor she outlined its many defects.

I will meet with the citizens directly and I’m prepared to see the undecideds and reach out to them. I want to begin a new phase in Macedonian democracy. We see that the time of women is coming, the time of critical, outspoken, inspiring women, said Siljanovska.